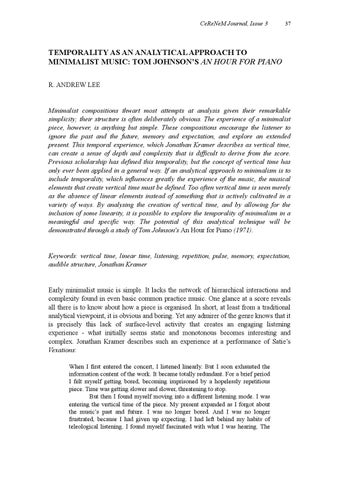 Minimalist compositions thwart most attempts at analysis given their remarkable simplicity; their structure is often deliberately obvious. The experience of a minimalist piece, however, is anything but simple. These compositions encourage the listener to ignore the past and the future, memory and expectation, and explore an extended present. This temporal experience, which Jonathan Kramer describes as vertical time, can create a sense of depth and complexity that is difficult to derive from the score. Previous scholarship has defined this temporality, but the concept of vertical time has only ever been applied in a general way. If an analytical approach to minimalism is to include temporality, which influences greatly the experience of the music, the musical elements that create vertical time must be defined. Too often vertical time is seen merely as the absence of linear elements instead of something that is actively cultivated in a variety of ways. By analysing the creation of vertical time, and by allowing for the inclusion of some linearity, it is possible to explore the temporality of minimalism in a meaningful and specific way. The potential of this analytical technique will be demonstrated through a study of Tom Johnson&#39;s An Hour for Piano (1971).

Early minimalist music is simple. It lacks the network of hierarchical interactions and complexity found in even basic common practice music. One glance at a score reveals all there is to know about how a piece is organised. In short, at least from a traditional analytical viewpoint, it is obvious and boring. Yet any admirer of the genre knows that it is precisely this lack of surface-level activity that creates an engaging listening experience - what initially seems static and monotonous becomes interesting and complex. Jonathan Kramer describes such an experience at a performance of Satie’s Vexations: When I first entered the concert, I listened linearly. But I soon exhausted the information content of the work. It became totally redundant. For a brief period I felt myself getting bored, becoming imprisoned by a hopelessly repetitious piece. Time was getting slower and slower, threatening to stop. But then I found myself moving into a different listening mode. I was entering the vertical time of the piece. My present expanded as I forgot about the music’s past and future. I was no longer bored. And I was no longer frustrated, because I had given up expecting. I had left behind my habits of teleological listening. I found myself fascinated with what I was hearing. The

Editor: Richard Glover The third issue of the CeReNeM journal contains five articles which discuss various aspects of the temporal experience of recent contemporary music, from the viewpoints of the performer, the listener and the composer. Discussions of spatiotemporality, microtimings, temporal verticality and cyclic repetition result from a diverse range of scholarly activity, but which all reside in ongoing explorations of how we control, interpret and experience temporality in music. 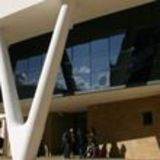