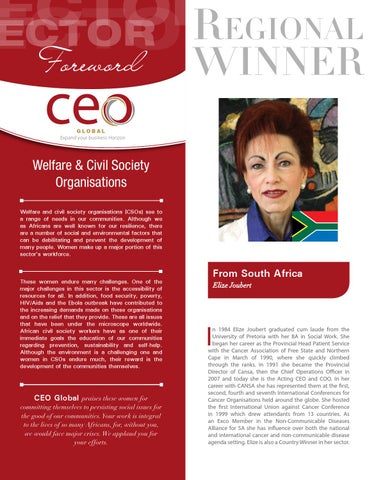 Welfare & Civil Society Organisations Welfare and civil society organisations (CSOs) see to a range of needs in our communities. Although we as Africans are well known for our resilience, there are a number of social and environmental factors that can be debilitating and prevent the development of many people. Women make up a major portion of this sectorâ&#x20AC;&#x2122;s workforce.

These women endure many challenges. One of the major challenges in this sector is the accessibility of resources for all. In addition, food security, poverty, HIV/Aids and the Ebola outbreak have contributed to the increasing demands made on these organisations and on the relief that they provide. These are all issues that have been under the microscope worldwide. African civil society workers have as one of their immediate goals the education of our communities regarding prevention, sustainability and self-help. Although the environment is a challenging one and women in CSOs endure much, their reward is the development of the communities themselves.

praises these women for committing themselves to persisting social issues for the good of our communities. Your work is integral to the lives of so many Africans, for, without you, we would face major crises. We applaud you for your efforts.

n 1984 Elize Joubert graduated cum laude from the University of Pretoria with her BA in Social Work. She began her career as the Provincial Head Patient Service with the Cancer Association of Free State and Northern Cape in March of 1990, where she quickly climbed through the ranks. In 1991 she became the Provincial Director of Cansa, then the Chief Operations Officer in 2007 and today she is the Acting CEO and COO. In her career with CANSA she has represented them at the first, second, fourth and seventh International Conferences for Cancer Organisations held around the globe. She hosted the first International Union against Cancer Conference in 1999 which drew attendants from 13 countries. As an Exco Member in the Non-Communicable Diseases Alliance for SA she has influence over both the national and international cancer and non-communicable disease agenda setting. Elize is also a Country Winner in her sector. 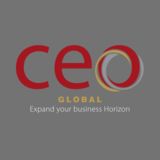 In this issue Dr Snowy Khoza and Dr Suzanne Ravenall share their perspectives on the challenges associated with leading in an ever changing...

In this issue Dr Snowy Khoza and Dr Suzanne Ravenall share their perspectives on the challenges associated with leading in an ever changing...