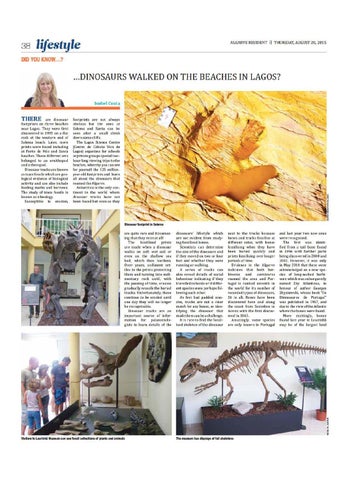 ...DINOSAURS WALKED ON THE BEACHES IN LAGOS? lsobel Costa

THERE are dinosaur footprints on three beaches near Lagos. They were first discovered In 1995 on a fiat rock at the western end of Salema beach. Later, more prints were found Including at Porto de M6s and Santa beaches. These different sets belonged to an ornithopod and a theropod. Dinosaur tracks are known as trace fossils which are geological evidence of biological activity and can also Include feeding marks and burrows. The study of trace fossils is known as ichnology. Susceptible to erosion,

footprints are not always obvious but the ones at Salema and Santa can be seen after a small climb downsomecllffs. The Lagos Science Centre (Centro de Ci@ncla Viva de Lagos) organises for schools or private groups special twohour-long viewing trips to the beaches, whereby you can see for yourself the 125 millionyear-old footprints and learn all about the dinosaurs that roamed the Algarve. Antarctica Is the only continent In the world where dinosaur tracks have not been found but even so they

are quite rare and lt Is amazing that they exist at all! The fossilised prints are made when a dinosaur walks on soft wet soli or even on the shallow sea bed, which then hardens. Over years, sediment settles in the prints protecring them and turning Into sedimentary rock until, with the passing of time, erosion

dinosaurs' lifestyle which are not evident from studyIng fossi Used bones. Scientists can determine the size of the dinosaurs and if they moved on two or four feet and whether they were running or walking. A series of tracks can also reveal details of social behaviour Indicating if they travelled In herds or If differ-

ent species were perhaps fol- the world for Its number of

tracks. Unfortunately, these conrinue to be eroded unril one day they will no longer be recognl sable. Dinosaur tracks are an important source of Information for palaeontologists to learn details of the

lowing each other. As feet had padded muscles, tracks are not a clear match for any bones, so identifying the dinosaur that made them can be a challenge. lt is rare to find the fossilised skeleton of the dinosaur

2byszewskl, whose book 路 os Dlnossauros de Portugal" was published In 1957, and due to the view of the Atlantic where the bones were found. More excitingly, bones found last year In Lourinh3 may be of the largest land

VIsitors to lour1nbl Museum can see 108811collectlona of plants and animals

next to the tracks because bones and tracks fossilise at different rates, with bones fossilising when they have been buried quickly and prints fossilising over longer periods of time. Evidence In the Algarve Indicates that both herbivores and carnivores roamed the area and Portugal Is ranked seventh In recorded types of dinosaurs, 26 In all. Bones have been discovered here and along the coast from Sesimbra to Aveiro with the first discovered In 1863. Amazingly, some species are only known In Portugal

The museum has dlaplaya of fuU skeletons

and last year two new ones were recognised. The first was Identified from a tall bone found in 1996 with further parts being discovered In 2000 and 2002. However, it was only in May 2014 that these were acknowledged as a new species of long-necked herbivore which was subsequently named 2by Atlantlcus, in

predator ever discovered in Europe, as well as one of the largest carnivorous dinosaurs that lived over 150 million years ago. Identified as Torvosaurus gurney!, this dinosaur with 10-centimetre long bladeshaped teeth was probably at the top of the food chain.lt grew to 10 metres in length and weighed up to five tons,

lt has around 23,000 inhabitants, 12kms of coastline and is home to the Lourinh3 museum, founded in 1984, which has the largest Iberian collection of dinosaur fossils and one of the most significant worldwide. I visited the museum a few years ago and was fascinated by the displays of full skeletons, fossil collections

Portuguese professions and a full size cottage, all showing tools and furnishings from the early 20"' century. lt was one of the best museums I have ever visited. Dinosaurs have always intrigued us and who is not in awe when visiting exhibitions with the wonderfully realistic full-scale robotic models around today. The

Algarve, why not take your children to visit the science centre in Lagos? lt is "a place where science, fun and hands-on learning are practice d all year round". Everyone will enjoy participating in the indoor and outdoor Interactive activities which are based on discoveries Involving 'Orientation and Navigation',

and some embryos discov- of plants and animals, and

recently released film 'Juras- 'Life on Board' and 'Dis-

ered recently are believed to also belong to this species. The lovely town of Lourinh3, 60kms north of Lisbon, is known as Portugal's capital of dinosaurs because this area is where many of the fossils have been found.

sic World' is the third highest grossing film ever and has generated so far over $1.5 billion in box office revenue, surely a testament of our fascination for these creatures. For an alternative day out to lying on the beach in the

especially the nest containing over 100 dinosaur eggs. Not only were the archaeological, agricultural and dinosaur exhibitions captivating but there were also impressive displays depicting 17 traditional

tance Communication'. Find out what it is like to row a boat, tie sailors' knots, build a lighthouse and experiment with maps and prisms and see some of the plant species brought back from the original Caravela trips. Open daily (lOam to 6pm), except for Mondays, the centre Is well worth a visit. Of course, you can also book to see the dinosaur tracks as not many people can say they have seen real dinosaur footprints on the beach! So now you know ...

lbls omltllopod, a bird-like dinosaur, walked on two feet and was travelling at around 1.7 kmlh 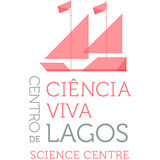 THERE are dinosaur footprints on three beaches near Lagos. They were first discovered In 1995 on a flat rock at the western end of Salema be...

THERE are dinosaur footprints on three beaches near Lagos. They were first discovered In 1995 on a flat rock at the western end of Salema be...