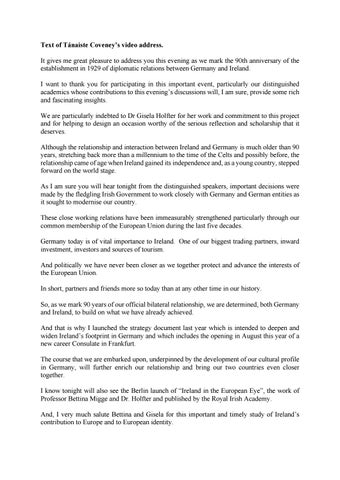 Text of Tánaiste Coveney’s video address. It gives me great pleasure to address you this evening as we mark the 90th anniversary of the establishment in 1929 of diplomatic relations between Germany and Ireland. I want to thank you for participating in this important event, particularly our distinguished academics whose contributions to this evening’s discussions will, I am sure, provide some rich and fascinating insights. We are particularly indebted to Dr Gisela Holfter for her work and commitment to this project and for helping to design an occasion worthy of the serious reflection and scholarship that it deserves. Although the relationship and interaction between Ireland and Germany is much older than 90 years, stretching back more than a millennium to the time of the Celts and possibly before, the relationship came of age when Ireland gained its independence and, as a young country, stepped forward on the world stage. As I am sure you will hear tonight from the distinguished speakers, important decisions were made by the fledgling Irish Government to work closely with Germany and German entities as it sought to modernise our country. These close working relations have been immeasurably strengthened particularly through our common membership of the European Union during the last five decades. Germany today is of vital importance to Ireland. One of our biggest trading partners, inward investment, investors and sources of tourism. And politically we have never been closer as we together protect and advance the interests of the European Union. In short, partners and friends more so today than at any other time in our history. So, as we mark 90 years of our official bilateral relationship, we are determined, both Germany and Ireland, to build on what we have already achieved. And that is why I launched the strategy document last year which is intended to deepen and widen Ireland’s footprint in Germany and which includes the opening in August this year of a new career Consulate in Frankfurt. The course that we are embarked upon, underpinned by the development of our cultural profile in Germany, will further enrich our relationship and bring our two countries even closer together. I know tonight will also see the Berlin launch of “Ireland in the European Eye”, the work of Professor Bettina Migge and Dr. Holfter and published by the Royal Irish Academy. And, I very much salute Bettina and Gisela for this important and timely study of Ireland’s contribution to Europe and to European identity.

Whilst I regret that I cannot be with you tonight, I wish the colloquium every success as we reflect on our past and look forward to the next 90 years and beyond, of relations between Ireland and Germany. Thank you very much