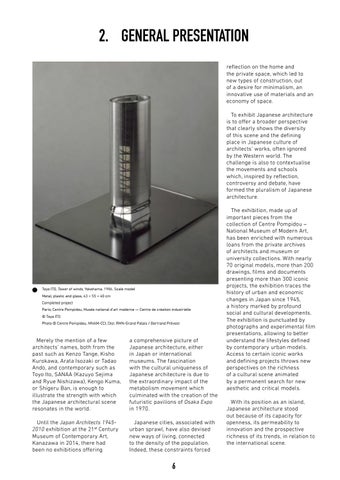 2. GENERAL PRESENTATION reflection on the home and the private space, which led to new types of construction, out of a desire for minimalism, an innovative use of materials and an economy of space. To exhibit Japanese architecture is to offer a broader perspective that clearly shows the diversity of this scene and the defining place in Japanese culture of architects’ works, often ignored by the Western world. The challenge is also to contextualise the movements and schools which, inspired by reflection, controversy and debate, have formed the pluralism of Japanese architecture.

Merely the mention of a few architects’ names, both from the past such as Kenzo Tange, Kisho Kurokawa, Arata Isozaki or Tadao Ando, and contemporary such as Toyo Ito, SANAA (Kazuyo Sejima and Ryue Nishizawa), Kengo Kuma, or Shigeru Ban, is enough to illustrate the strength with which the Japanese architectural scene resonates in the world.

Until the Japan Architects 19452010 exhibition at the 21st Century Museum of Contemporary Art, Kanazawa in 2014, there had been no exhibitions offering

Japanese cities, associated with urban sprawl, have also devised new ways of living, connected to the density of the population. Indeed, these constraints forced

The exhibition, made up of important pieces from the collection of Centre Pompidou – National Museum of Modern Art, has been enriched with numerous loans from the private archives of architects and museum or university collections. With nearly 70 original models, more than 200 drawings, films and documents presenting more than 300 iconic projects, the exhibition traces the history of urban and economic changes in Japan since 1945, a history marked by profound social and cultural developments. The exhibition is punctuated by photographs and experimental film presentations, allowing to better understand the lifestyles defined by contemporary urban models. Access to certain iconic works and defining projects throws new perspectives on the richness of a cultural scene animated by a permanent search for new aesthetic and critical models. With its position as an island, Japanese architecture stood out because of its capacity for openness, its permeability to innovation and the prospective richness of its trends, in relation to the international scene. 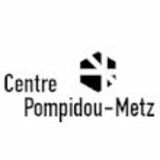