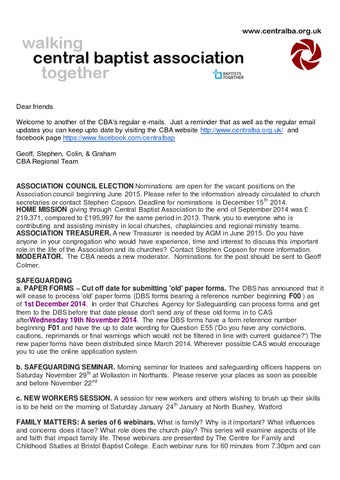 Dear friends Welcome to another of the CBA&#39;s regular e-mails. Just a reminder that as well as the regular email updates you can keep upto date by visiting the CBA website http://www.centralba.org.uk/ and facebook page https://www.facebook.com/centralbap Geoff, Stephen, Colin, &amp; Graham CBA Regional Team

ASSOCIATION COUNCIL ELECTION Nominations are open for the vacant positions on the Association council beginning June 2015. Please refer to the information already circulated to church secretaries or contact Stephen Copson. Deadline for nominations is December 15 th 2014. HOME MISSION giving through Central Baptist Association to the end of September 2014 was £ 219,371, compared to £195,997 for the same period in 2013. Thank you to everyone who is contributing and assisting ministry in local churches, chaplaincies and regional ministry teams. ASSOCIATION TREASURER. A new Treasurer is needed by AGM in June 2015. Do you have anyone in your congregation who would have experience, time and interest to discuss this important role in the life of the Association and its churches? Contact Stephen Copson for more information. MODERATOR. The CBA needs a new moderator. Nominations for the post should be sent to Geoff Colmer. SAFEGUARDING a. PAPER FORMS – Cut off date for submitting &#39;old&#39; paper forms. The DBS has announced that it will cease to process &#39;old&#39; paper forms (DBS forms bearing a reference number beginning F00 ) as of 1st December 2014. In order that Churches Agency for Safeguarding can process forms and get them to the DBS before that date please don&#39;t send any of these old forms in to CAS afterWednesday 19th November 2014. The new DBS forms have a form reference number beginning F01 and have the up to date wording for Question E55 (&#39;Do you have any convictions, cautions, reprimands or final warnings which would not be filtered in line with current guidance?&#39;) The new paper forms have been distributed since March 2014. Wherever possible CAS would encourage you to use the online application system b. SAFEGUARDING SEMINAR. Morning seminar for trustees and safeguarding officers happens on Saturday November 29 th at Wollaston in Northants. Please reserve your places as soon as possible and before November 22 nd c. NEW WORKERS SESSION. A session for new workers and others wishing to brush up their skills is to be held on the morning of Saturday January 24th January at North Bushey, Watford FAMILY MATTERS: A series of 6 webinars. What is family? Why is it important? What influences and concerns does it face? What role does the church play? This series will examine aspects of life and faith that impact family life. These webinars are presented by The Centre for Family and Childhood Studies at Bristol Baptist College. Each webinar runs for 60 minutes from 7.30pm and can