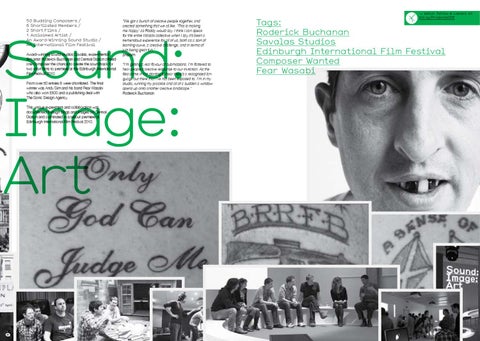 “We got a bunch of creative people together, and created something that we all like. ‘This is making me happy’ as Roddy would say. I think I can speak for the entire Wasabi collective when I say it’s been a tremendous experience for all of us, both as a sort of learning-curve, a creative challenge, and in terms of just being great fun.” phipsim

Sound: Image: Art Award-winning sound studios Savalas, experimental film artist Roderick Buchanan and Central Station offered one composer the chance to create the soundtrack for two short films to premiere at the Edinburgh International Film Festival 2010. From over 50 entries 6 were shortlisted. The final winner was Andy Sim and his band Fear Wasabi who also won £500 and a publishing deal with The Sonic Design Agency.

This unique experiment and collaboration was documented through blogs and images on Central Station and culminated in a sellout premiere at Edinburgh International Film Festival 2010.

“I’m getting a real flavour of submissions. I’m flattered to hear people’s creative response to our invitation. As the files come in I’m starting to hear there’s a recognised language out there that I’ve not been exposed to. I’m in my studio, running my practice and all of a sudden a window opens up onto another creative landscape.” Roderick Buchanan