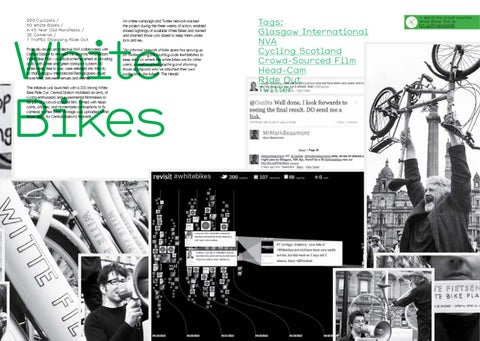 An online campaign and Twitter network tracked the project during the three weeks of action, enabled shared sightings of available White Bikes and named and shamed those who dared to keep them under lock and key.

Politically-driven art collective NVA collaborated with Central Station to re-enact the anarchic Amsterdam White Bike Plan – a radical scheme aimed at providing a city with a free and green transport system. 50 white bikes, free to use, were released into the city so that Glasgow International Festival-goers could travel freely between venues and events.

“An informal network of bike spies has sprung up on Twitter, using the hashtag code #whitebikes to keep tabs on where the white bikes are for other users, as well as photographing and shaming those spoilsports who’ve attached their own padlocks to the bikes” The Herald

White Bikes The initiative was launched with a 200 strong White Bike Ride Out. Central Station mobilised an army of cyclng enthusiasts and experimental filmmakers to be part of a crowd-sourced film. Armed with headcams, phones, and homemade contraptions to fix cameras to their bikes, footage was uploaded within hours ready for Central Station’s final edit.