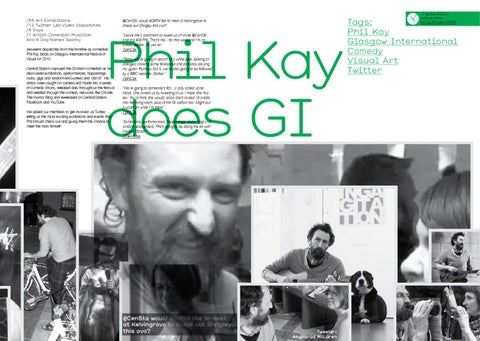 @CenSta would #GIPhil like to meet at Kelvingrove to check out Shrigley this avo?

Central Station captured the Scottish comedian as he discovered exhibitions, performances, happenings, clubs, gigs and random encounters and ‘did GI’. His antics were caught on camera and made into a series of comedic shorts, released daily throughout the festival and seeded through the comedy networks like Chortle, The Humor Blog and rereleased on Central Station, Facebook and YouTube. We asked our members to get involved via Twitter, telling us the most exciting exhibitions and events that Phil should check out and giving them the chance to meet the man himself.

“Leave me a comment or tweet us an invite @CenSta and tag #GI Phil. That’s me - for this weekend I’m an artistic soldier. Sir yes sir.” /philk

“Today we’re going in search of a white bike, looking at collages, making some flickbooks and probably playing my guitar. Rumour has it, we’re also going to be followed by a BBC reporter. Stalker.” /philk “We’re going to someone’s flat....a lady called Janie Nicoll. She invited us by tweeting at us. I hope she has tea. You’d think she would, since she’s invited 15 artists into her living room, plus all the GI visitors too. Might put a wash on while I’m there.” /philk