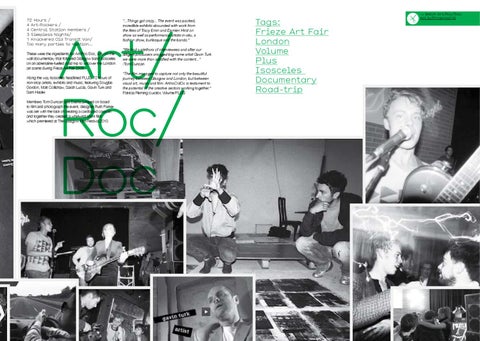 “...Things got crazy... The event was packed, incredible exhibits abounded with work from the likes of Tracy Emin and Damien Hirst on show as well as performance artists in-situ, a fashion show, burlesque and the bands.”

These were the ingredients for Art/Roc/Doc, a fly on the wall documentary that followed Glasgow band Isosceles on an adrenaline-fuelled road trip to uncover the London art scene during Frieze Art Fair 2009. Along the way Isosceles headlined PLUS, 72 hours of non-stop artists, exhibits and music, featuring Douglas Gordon, Matt Collishaw, Sarah Lucas, Gavin Turk and Sam Hasler.

Members Tom Duncan and Dasha jumped on board to film and photograph the event, designer Ruth Parker was set with the task of creating a cardboard caravan and together they created a whirlwind short film which premiered at The Glasgow Film Festival 2010.

“We had a plethora of interviewees and after our diligent producers snagged big-name artist Gavin Turk we were more than satisfied with the content...” /Tom Duncan “The film managed to capture not only the beautiful journey between Glasgow and London, but between visual art, music and film. Art/roC/dOc is testament to the potential of the creative sectors working together.” Patricia Fleming (curator, Volume/PLUS)