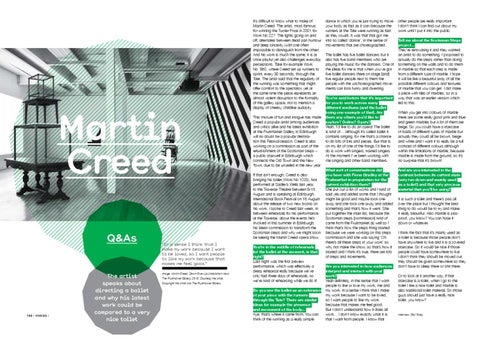 It’s difficult to know what to make of Martin Creed. The artist, most famous for winning the Turner Prize in 2001 for Work No.227: The lights going on and off, alternates between dead pan humour and deep sincerity (with one often impossible to distinguish from the other). And his work is much the same; it is at once playful yet also challenges everyday perceptions. Take for example Work No. 850, where Creed set up runners to sprint, every 30 seconds, through the Tate. The artist said that the regularity of the running was something that might offer comfort to the spectator, yet at the same time the piece represents an almost violent disruption to the formality of the gallery space, not to mention a display of cheeky, childlike audacity. This mixture of fun and intrigue has made Creed a popular artist among audiences and critics alike and his latest exhibition at the Fruitmarket Gallery in Edinburgh will no doubt be a popular destination this Festival season. Creed is also working on a commission as part of the refurbishment of the Scotsman steps – a public stairwell in Edinburgh which connects the Old Town and the New Town, due to be unveiled in the new year. If that isn’t enough, Creed is also bringing his ballet (Work No.1020), first performed at Sadler’s Wells last year, to the Traverse Theatre between 8-15 August and is speaking at Edinburgh International Book Festival on 16 August about the release of two new books on his work. I spoke to Creed last week, in between rehearsals for his performance at the Traverse, about the events he’s involved in this summer in Edinburgh, his latest commission to transform the Scotsman steps and why we might soon be seeing the Martin Creed opera show. You’re in the middle of rehearsals for the ballet at the moment, is that right? Last night was the first preview performance, which was effectively a dress rehearsal really because we’ve only had three days of rehearsals, so we’re kind of rehearsing while we do it! Do you see the ballet as an extension of your piece with the runners through the Tate? There are similar ideas for example the presence and movement of the body... Aye, that’s where it came from. You can think of the running as a really simple

dance in which you’re just trying to move your body as fast as it can (because the runners at the Tate were running as fast as they could). It was that that got me into so called ‘dance’, in the sense of movements that are choreographed. The ballet has five ballet dancers but it also has five band members who are playing the music for the dancers. One of the ideas for me is that when you’ve got five ballet dancers there on stage [and] five regular people next to them the people with the unchoreographed movements can look funny and diverting. You’ve said before that it’s important for you to work across many different mediums (and the ballet being one example of that). Are there any others you’d like to explore? Online? Opera? Yeah, I’d like to do an opera! The ballet is kind of… although it’s called ballet it contains singing, for me that’s a chance to do lots of bits and pieces. But that is on my list of one of the things I’d like to do is work with singers, trained singers. At the moment I’ve been working with me singing and other band members. What sort of conversations did you have with Fiona Bradley at the Fruitmarket in preparation for the current exhibition there? She put out a list of works and I kind of said yes and added some that I thought might be good and maybe took one away and she took one away and added something and that’s how it went. She put together the main list, because the Scotsman steps [commission] kind of came from the Fruitmarket as well so I think that’s how the steps thing started because we were working on this steps commission and she was saying ‘Oh there’s all these steps in your work’ so why not make the show, so that’s how it started and I think it’s true, there are lots of steps and increments. Are you interested in how audiences interpret and interact with your work? Yeah definitely, in the sense that I want people to like or love my work, me and my work. In a sense I think that I make my work because I want to be loved, so I want people to like my work because that makes me feel good. But I don’t understand how it does all work… I don’t know exactly what it is that I want from people. I know that

other people are really important. I don’t think I can find out about my work until I put it into the public. Tell me about the Scotsman Steps project… They’re renovating it and they wanted an artist to do something. I proposed to actually do the steps rather than doing something on the walls and to do them in marble so that each step is made from a different type of marble. I hope it will be like a beautiful array of all the possible different colours and textures of marble that you can get. I did make a piece with tiles of marbles, so in a way that was an earlier version which led to this. When you get into colours of marble there are some really good pink and blue and green marbles but a lot of them are beige. So you could have a staircase of loads of different types of marble but actually they could all be brown, beige and white and I want it to really be a full contrast of different colours although within the limitations of marble, because marble is made from the ground, so it’s no surprise that it’s brown! And are you interested in the contrast between its current state (very run down and mainly used as a toilet!) and that very precious material that you’ll be using? It is such a toilet and there’s piss all over the place but I thought the best thing to do would be to try and make it really beautiful. Also marble is pissproof, you know? You can hose it down or whatever. I think the fact that it’s mainly used as a toilet is because those people don’t have anywhere to live and it is a covered staircase. So it would be nice if those people could have somewhere to live. I don’t think they should be moved out, they should be given somewhere so they don’t have to sleep there or shit there. Or to look at it another way, if that staircase is a toilet, when I go to the toilet I like a nice toilet and marble is also traditional toilet material. So those guys should just have a really nice toilet, you know?