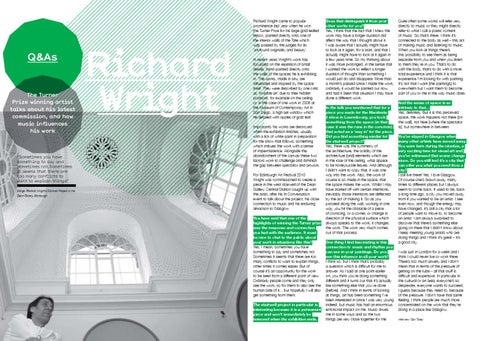 The Turner Prize winning artist talks about his latest commission, and how music influences his work

“Sometimes you have something to say and sometimes not.Sometimes it seems that there are too many conflicts to want to explain things” Image: Richard Wright’s Stairwell Project at the Dean Gallery, Edinburgh

Richard Wright came to popular prominence last year when he won the Turner Prize for his large gold-leafed fresco, painted directly onto one of the interior walls of the Tate which was praised by the judges for its ‘profound originality and beauty’. In recent years Wright’s work has focussed on the repetition of small details, hand-painted directly onto the walls of the spaces he is exhibiting in. The works, made in situ, are influenced and inspired by the space itself. They were described by one critic as ‘invisible art’ due to their hidden positions, for example on the ceiling or, in the case of one work in 2006 at the Museum of Contemporary Art in San Diego, a high set window which he detailed with ripples of gold leaf. Importantly his works are destroyed when the exhibition finishes, usually with a lick of white paint in preparation for the show that follows; something which imbues the work with a sense of impermanence. Alongside the abandonment of the canvas these two factors work to challenge and diminish the gap between spectator and artwork. For Edinburgh Art Festival 2010 Wright was commissioned to create a piece in the west stairwell of the Dean Gallery. Central Station caught up with the artist, after his In Conversation event to talk about the project, his close connection to music and his enduring attraction to Glasgow. You have said that one of the highlights of winning the Turner prize was the response and connection you had with the audience. It must be nice to chat to the public about your work in situations like this? Yes, I mean, sometimes you have something to say and sometimes not. Sometimes it seems that there are too many conflicts to want to explain things, other times it comes easier. But of course it’s an opportunity for the work to be seen from a different point of view. Ordinarily people come and they only see the work, so for them to also see the human side of it... but hopefully I will also get something from them. The stairwell project in particular is interesting because it is a permanent piece and won’t immediately be removed when the exhibition ends.

Does that distinguish it from your other works for you? Yes, I think that the fact that I knew the work may have a longer duration did affect the way that I thought about it. I was aware that I actually might have to look at it again, for a start, and that I actually might have to look at it again in a few years time. So my thinking about it was more prolonged, in the sense that I wanted the work to reflect a longer duration of thought than something I would just do and disappear. More than a month’s passed since I made the work, ordinarily it would be painted out now, and had it been that situation I may have done a different work. In the talk you mentioned that for a piece you made for the Manifesta 2 show in Luxembourg, you took something from the space (in that case it was the runs in the concrete) that acted as a ‘way in’ for the piece. Did you find something similar for the stairwell project? Yes, there was the symmetry of the architecture, the solidity of the architecture [and] elements which are in the rose of the ceiling, what appear to be honeysuckle leaves. And although I didn’t want to copy that, it was one way into the work. Also, the work of course is so made in the space, that the space makes the work. Whilst I may have started off with certain intentions, inevitably those intentions are deflected by the act of making it. So as you proceed along the wall, working in one way, you hit the obstacle of a piece of cornicing, or a corner, or change in direction of the physical surface which always speaks to the work, it changes the work. The work very much comes out of that process. One thing I find fascinating is this connection to music and rhythm you can see in your paintings. Do you see this influence in all your work? I think so, but I think that’s probably a question which is difficult for me to answer. As I said at one point earlier on, you think you’re doing something different and it turns out that it’s actually like something else that you’ve done [before]. And I think in terms of looking at things, art has been something I’ve been interested in since I was very young indeed, but music has had an enormous emotional impact on me. Music drives me in some ways and so the two things are very close together for me.

Quite often some works will refer very directly to music or they might directly refer to what I call a poetic content of music. So that’s there. I think it’s connected to the body as well – this act of making music and listening to music. When you look at things there’s this possibility to see them as being separate from you and when you listen to them they’re in you. That’s to do with the body, that’s to do with a more total experience and I think it is that experience I’m looking for with painting. It’s not that I want [the paintings] to overwhelm but I want them to become part of you or me in the way music does. And the sense of space is so intrinsic to that… Yes, definitely. But it is this perceived space, the work happens not there [on the wall], not here [where the spectator is], but somewhere in between. You’ve stayed in Glasgow when many other artists have moved away. You were here during the nineties, a very exciting time for visual art and you’ve witnessed that scene change since. Do you still feel it’s a city that can offer you what you need from a city? I still live there! Yes, I love Glasgow. Of course one’s drawn away, many times to different places but I always seem to come back. It used to be, back a long time ago, a city you moved away from if you wanted to be an artist. I see even now, and though the energy may have changed, it’s still a city that a lot of people want to move to, to become an artist. I am always surprised to discover that there’s something else going on there that I didn’t know about. I keep meeting young artists who are doing things and I think it’s great – it’s a good city. I was just in London for a week and I think I could never live or work there. There’s too much anxiety and I don’t mean that in terms of the pressure of getting on the tube – all that stuff is difficult and expensive. In particular in the cultural or art area, everyone’s so desperate, everyone wants to succeed, I guess because they need to, because of the pressure. I don’t have that same feeling, I think people are much more concentrated on the work that they’re doing in a place like Glasgow. Interview: Gail Tolley