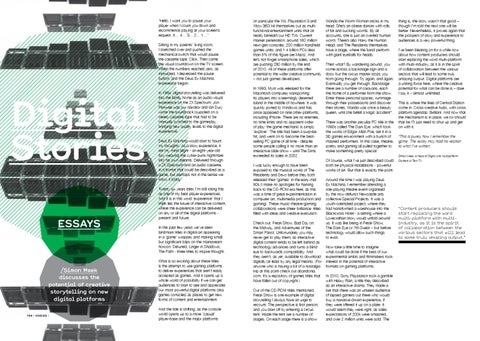 “Hello. I want you to pause your player when I count you down and recommence playing at your screen’s request. 5… 4… 3… 2… 1…” Sitting in my parents’ living room, I stretched over and pushed the mechanical switch that would pause the cassette tape. Click. Then came the visual countdown on the TV screen. When the numbers reached zero, as instructed, I depressed the pause button, and the Deus Ex Machina experience began.

In 1984, digital storytelling was delivered into the family home as an audio-visual experience on the ZX Spectrum. Jon Pertwee was our narrator and Ian Dury wrote the soundtrack (supplied on a stereo cassette tape that had to be manually synched to the gameplay, bringing new quality levels to the digital experience). Deus Ex Machina would start to haunt my thoughts. As a story experience, it set my mind alight - an eight-year-old boy weaving this cyber-punk nightmare into his own dreams. Delivered through a ZX Spectrum and an audio cassette, in a format that could be described as a game, but perhaps not in the sense we know it today. Twenty six years later, I’m still rating this as one of my best player experiences. And it is in this word ‘experience’ that I think lies the future of interactive content, where the experience can be delivered on any or all of the digital platforms present and future. In the past few years we’ve seen landmark titles in digital art appearing in a ‘game’ wrapper, and making small but significant blips on the mainstream horizon: Detuned, Linger in Shadows, The Path - three titles to inspire thought. What is so exciting about these titles is the attempt to use gaming platforms to deliver experiences that aren’t easily accepted as games. And it opens up a whole world of possibility if we can get audiences to start to see and appreciate our most powerful digital platforms (aka games consoles) as places to get new forms of content and entertainment. And the tide is shifting, as the console world opens up to a more ‘casual’ player-base and the major platforms

(in particular the Wii, Playstation 3 and Xbox 360) kit themselves out as multifunctional entertainment units that sit neatly beneath our HD TVs. Current market penetration: around 160 million next-gen consoles; 200 million handheld games units; and 1.4 billion PCs (less than 5% of this figure are Macs). And let’s not forget smartphone sales, which are pushing 280 million by the end of 2010. All of these platforms offer potential to the wider creative community – not just games developers. In 1993, Myst was released for the Macintosh computer, transporting its players into a seemingly deserted island in the middle of nowhere. It was quickly ported to Windows and has since appeared on nine other platforms, including iPhone. There are no enemies, no time limits and no apparent order of play: the game mechanic is simply ‘explore’. The title had been a surprise hit, and went on to become the bestselling PC game of all time - despite some people calling it no more than an interactive slide show – until The Sims exceeded its sales in 2002. I was lucky enough to have been exposed to the musical works of The Residents and Devo before they both released their ‘games’ in the early-mid 90s (I make no apologies for harking back to the CD-ROM era here, as this was a time of great experimentation in computer art, multimedia production and gaming). These music-theatre-gaming collaborations were sheer brilliance: titles filled with ideas and creative execution. Check out: Freak Show, Bad Day on the Midway, and Adventures of the Smart Patrol. Unfortunately you may never get to play them, as interactive digital content tends to be left behind as technology advances and turns a blind eye to backwards compatibility. And they aren’t, as yet, available to download digitally (at least by any legal means). (For anyone who is having a bit of a nostalgia trip at this point check out abandonia. com. It’s a repository of games titles that have fallen out of copyright.) Out of the CD-ROM titles mentioned, Freak Show is one example of digital storytelling I always have an urge to recount. The perspective is first person, and you start off by entering a circus tent. Inside the tent are a number of stages. On each stage there is a show:

Wanda the Worm Woman sticks in my head. She’s an obese dancer with rolls of fat and sucking worms. By all accounts, she is just an overfed human worm. There’s also Harry the Human Head, and The Residents themselves have a stage, where the band perform with giant eyeballs for heads. Then what? By wandering around, you come across a backstage sign and a door, but the circus master stops you from going through. Try again, and again. Eventually you get through. Backstage there are a number of caravans, each the home of a performer from the show. Enter these personal spaces, rummage through their possessions and discover their stories. Wanda was once a beauty queen, until she befell a tragic accident*. There was another peculiar PC title in the 1990s called The Dark Eye, which took the works of Edgar Allan Poe, set it in a 3D games environment with a bunch of masked performers. In this case, theatre, poetry and gaming all pulled together to make something pretty special.

thing is, the story wasn’t that good – though I’m told the next one will be better. Nevertheless, it proves again that the prospect of story and experience to audiences is a very powerful thing. I’ve been bleating on for a while now about how content producers should start replacing the word multi-platform with multi-industry, as it is in the spirit of collaboration between the various sectors that will lead to some truly amazing output. Digital platforms are a uniting force here, where the creative potential for what can be done is – dare I say it – almost unlimited. This is where the likes of Central Station come in. Cross-creative hubs, with cross platform agendas. Brilliant. And now that the mechanism is in place, we (or should that be I?) just need to shut up and get on with it. *This is purely how I remember the game. The reality may hold no relation to what I’ve written. Simon Meek is Head of Digital and Multiplatform

Of course, what I’ve just described could both be physical installations - powerful works of art. But that is exactly the point. Around the time I was playing Deus Ex Machina, I remember attending a role-playing theatre event organised by the now-defunct Newcastle arts collective Special Projects. It was a youth-orientated project, where they had transformed a warehouse into the Blackcross Hotel - a setting where a Lovecraftian story would unfold around us. It was like being in Freak Show, The Dark Eye or 7th Guest – but before technology would allow such things to exist. Now take a little time to imagine what could be done if the best of our experimental artists and filmmakers took interest in the potential of interactive formats on gaming platforms. In 2010, Sony Playstation took a gamble with Heavy Rain, a title they described as an interactive drama. They made a bet that there was an unseen audience of lapsed gamers out there who would buy a narrative-driven experience, if they were offered it up on a plate. It would seem they were right, as sales expectations of 200k were smashed, and over 2 million units were sold. The

“Content producers should start replacing the word multi-platform with multiindustry, as it is the spirit of collaboration between the various sectors that will lead to some truly amazing output.”