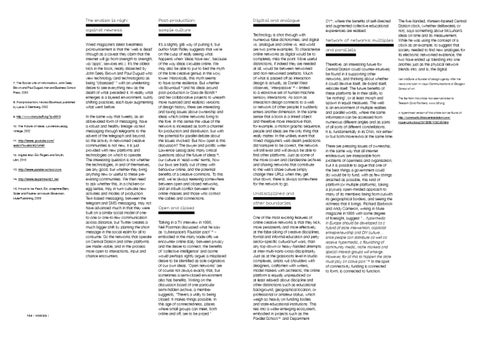 Wired magazine’s latest breathless pronouncement is that the ‘web is dead’ (though as a caveat they claim that the internet will go from strength to strength, via ‘apps’, services etc.). It’s the oldest trick in the book, neatly dissected by John Seely Brown and Paul Duguid who view technology (and technologists) as being “obsessed” 7 with an unrelenting desire to see everything new as the death of what preceded it. In reality what emerges is a layered environment, subtly shifting practices, each layer augmenting what went before. In the same way that tweets, as an abbreviated form of messaging, have a robust and healthy lineage via text messaging through telegrams to the advent of the telegraph and beyond, so the activity in networked creative communities is not new, it is just provided with new platforms and technologies on which to operate. The interesting question is not whether the technologies, in and of themselves, are any good, but whether they bring anything new or useful to these preexisting communities. We then need to ask whether this, in a chicken-oregg sense, may in turn cultivate new activities and modes of production. Text-based messaging, between the telegram and SMS messaging, may not have advanced much in that they were built on a similar social model of oneto-one or one-to-few communication across distance, but Twitter creates a much bigger shift by planting the short message in the social realm for all to consume. So the networks that operate on Central Station and other platforms are made visible, and in the process more open to interactions, input and chance encounters.

It’s a slightly glib way of putting it, but author Matt Ridley suggests that we’re on the cusp of really seeing what happens when ‘ideas have sex’, because of the way ideas circulate online. We may also be able to put to bed the myth of the lone creative genius in the ivory tower. Historically, this myth seems to have some resilience. But whether via Bourriaud 8 and his ideas around post-production or Sara de Bondt 9 and her collaborative projects to unearth more nuanced (and realistic) versions of design history, there are interesting and taxing issues about ownership and ideas which online networks bring to the fore. In this sense the value of the network is increased as both a channel for production and distribution, but with the potential for parallel debate about the issues involved. But how open is this discussion? The lawyer and prolific writer Lawrence Lessig asks many critical questions about the future of ideas 10, our culture in ‘read-write’ terms, how our laws are badly out of step with behaviour online, and the potential benefits of a creative commons. To this end, we’re always teetering somewhere between open and closed networks, and an inbuilt conflict between the online masses and those who control the cables and connections. Open and closed

Talking in a TV interview in 1995, Neil Postman discussed what he saw as ‘cyberspace’s Faustian pact’ 11 – embodied in the many trade-offs we encounter online daily: between privacy and the desire to connect, the benefits of ‘collective intelligence’ and (some would perhaps rightly argue) a misplaced desire to be identified as sole originators of our own ideas. ‘Open networks’ are of course not always exactly that, but sometimes a semi-closed environment also has benefits. Writing on the discussion board of one particular semi-hidden archive, a member suggests, “There’s a utility to being closed. It makes things possible. In this age of connectedness, places where small groups can meet, both online and off, are to be prized.”

Technology is shot through with numerous false dichotomies, and digital vs. analogue and online vs. real world are two prime examples. To characterise online networks as digital would be to completely miss the point. More useful distinctions, if indeed they are needed at all, would be between networked and non-networked artefacts. Much of what is passed off as interaction design is actually, as Daniel West observes, ‘interpassive’ 12 – limited to a restrictive set of human/machine sensory interactions. As soon as interaction design connects to a web or network (of other people) it suddenly enters another dimension. In the same sense that a book is a linked object and therefore more interactive than, for example, a motion graphic sequence, people and ideas are the only thing that really matter. In the unlikely event that Wired magazine’s web-death predictions did transpire to be correct, the network will still exist and will always be able to find other platforms. Just as some of the more covert and clandestine archives and sharing networks that contribute to the web’s share culture simply change their URLs when they get shut down, there is always somewhere for the network to go. Undisciplined and other boundaries

One of the most exciting features of online creative networks is that they kick, more persistently and more effectively, at the false siloing of creative disciplines, formal and informal education and petty sector-specific cultural turf wars, than any top-down or heavy-handed attempts at inter-multi-trans-cross-disciplinarity. Just as at the grassroots level in studio complexes, artists rub shoulders with designers, craftsmen with writers, model makers with architects, the online platform is equally unprejudiced (or at least relaxed) about discipline and other distinctions such as educational background, geographical location, or professional or amateur status, which weigh so heavily on funding bodies and state educational institutions. This ties into a wider emerging ecosystem, embodied in projects such as the Parallel School 13 and Department

2114, where the benefits of self-directed and augmented collective educational experiences are realised. Network of networks: multiples and parallels

Therefore, an interesting future for Central Station could counter-intuitively be found in it supporting other networks, and thinking about whether it could devolve itself, de-brand itself, relocate itself. The future benefits of these platforms lie in their ability to ‘be nothing’, or at least morph and spawn in equal measures. The web is an environment of multiple realities and parallel worlds, where the same information can be accessed from numerous different angles and as parts of all sorts of different constellations. It is, fundamentally in its DNA, not either/ or but both/more/extra at the same time. There are pressing issues of ownership, in the same way that all internet endeavours are inseparable from problems of openness and organisation, but it is possible to argue that one of the best things a government could do would be to fund, with as few strings attached as possible, this kind of platform (or multiple platforms), taking a joyously open-minded approach to many of its members being from outwith its geographical borders, and seeing the richness that it brings. Richard Barbrook and Andy Cameron, writing in Mute magazine in 1995 with some degree of foresight, suggest “... hypermedia in Europe should be developed as a hybrid of state intervention, capitalist entrepreneurship and DIY culture… once people can distribute as well as receive hypermedia, a flourishing of community media, niche markets and special interest groups will emerge. However, for all this to happen the state must play an active part.” 15 In the spirit of connectivity, funding is connected to form, is connected to function.

The five-handed, thirteen-faceted Central Station clock, (whether deliberately or not), says something about McLuhan’s ideas on time and its measurement. While he was using the concept of a clock as an example, to suggest that society needed to find new analogies for its electronic networked existence, the two have ended up blending into one another, just as the physical network blends into, and is, the digital. Neil McGuire is founder of design agency After the News and tutor in Visual Communications at Glasgow School of Art. The fee from this article has been donated to Telecom Sans Frontiers, www.tsfi.org A hyperlinked version of this article can be found at: http://community.thisiscentralstation.com/ Hyper-Links/blog/2673080/126249.html