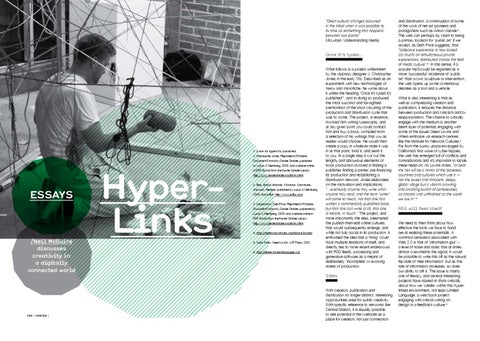 “Great cultural changes occurred in the West when it was possible to fix time as something that happens between two points” McLuhan, Understanding Media Once it’s typed...

What follows is a project undertaken by the visionary designer J. Christopher Jones in the early 70s. Described as an experiment with new technologies of Xerox and microfiche, he wrote about it under the heading ‘Once it’s typed it’s published’1, and in doing so produced the most succinct and far-sighted premonition of the short circuiting of the production and distribution cycle that was to come. The project, in essence, involved him writing typescripts, and at any given point you could contact him and buy a book, compiled from a selection of his writings that you as reader would choose. He would then create a copy in whatever state it was in at that point, bind it, and send it to you. In a single step it cut out the lengthy and labourious elements of book production involved in finding a publisher, finding a printer, pre-financing its production and establishing a distribution network. Jones elaborates on the motivation and implications; “...eventually anyone may write what anyone may read, and the term ‘writer’ will come to mean, not that one has written a commercially published book, but that one can write at all, that one is literate, in touch.” The project, and more importantly the idea, preempted the publish-then-edit online cultures that would subsequently emerge, and while not fully social in its production, it embodied the idea that a ‘thing’ could have multiple iterations of itself, and directly ties to more recent endeavours with RSS feeds, processing and generative software as a means of deliberately ‘incomplete’ or evolving states of production. Sites

With creation, publication and distribution no longer distinct, interesting opportunities arise for public creativity. With specific reference to networks like Central Station, it is equally possible to see potential in the (web)site as a place for creation, not just connection

and distribution, a continuation of some of the work of net-art pioneers and protagonists such as Anton Vidokle 2. The web can perhaps lay claim to being a primary location for ‘public art’ if we accept, as Seth Price suggests, that “collective experience is now based (as much) on simultaneous private experiences, distributed across the field of media culture” 3. In this sense, if a popular mp3 could be regarded as a more ‘successful’ incidence of ‘public art’ than a civic sculpture or intervention, the web opens up some contentious debates as a tool and a vehicle. What is also interesting is that as well as compressing creation and publication, it reduces the distance between production and criticism and/or reappropriation. The chance to critically engage with the medium is another latent layer of potential, engaging with some of the issues Geert Lovink and others embrace via research centres like the Institute for Network Cultures 4. Far from the sunny utopia envisaged by California’s first wave of cyber-hippies, the web has emerged full of conflicts and contradictions and it’s important to tackle these head-on. As Lovink notes, “at best the net will be a mirror of the societies, countries and cultures which use it — not the sweet and innocent, sleepy global village but a vibrant crawling and crashing bunch of complexities, as chaotic and unfinished as the world we live in” 5 RSS will feed itself

We need to then think about how effective the tools we have to hand are at realising these potentials. A common sensation associated with Web 2.0 is that of ‘information glut’ – a level of noise and static that at times almost overwhelms the signal. It would be possible to write this off as the natural flip-side of ‘free information’ but as this tide of information increases, so does our ability to sift it. The issue is mainly one of literacy, and several interesting projects have started to think critically about how we ‘create’ within this hyperlinked environment, not least Limited Language, a web/book project engaging with critical writing on design in a feedback culture.6