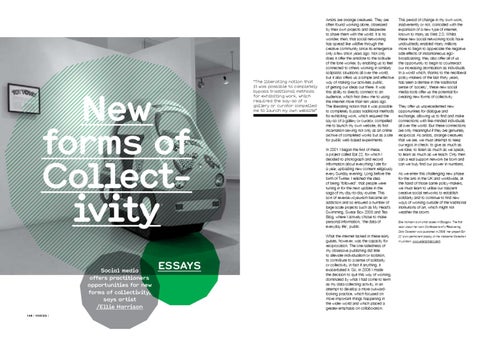 “The liberating notion that it was possible to completely bypass traditional methods for exhibiting work, which required the say-so of a gallery or curator compelled me to launch my own website”

Artists are strange creatures. They are often found working alone, obsessed by their own projects and desperate to share them with the world. It is no wonder, then, that social networking has spread like wildfire through the creative community since its emergence only a few short years ago. Not only does it offer the antidote to the solitude of the lone worker, by enabling us to feel connected to others working in similarly solipsistic situations all over the world, but it also offers us a simple and effective way of making our activities public, of getting our ideas out there. It was this ability to directly connect to an audience, which first drew me to using the internet more than ten years ago. The liberating notion that it was possible to completely bypass traditional methods for exhibiting work, which required the say-so of a gallery or curator, compelled me to launch my own website, its first incarnation serving not only as an online archive of completed works but as a site for public web-based experiments. In 2001 I began the first of these, a project called Eat 22, for which I decided to photograph and record information about everything I ate for a year, uploading new content religiously every Sunday evening. Long before the birth of Twitter, I relished the idea of being ‘followed’: that people were tuning in for the next update in the saga of my day-to-day routine. This sort of reverse-voyeurism became an addiction and so ensured a number of large scale projects such as My Head’s Swimming, Swear Box 2005 and Tea Blog, where I actively chose to make personal information, ‘the data of everyday life’, public.

This period of change in my own work, inadvertently or not, coincided with the expansion of a new type of internet, known to many as Web 2.0. Whilst these new social networking tools have undoubtedly enabled many millions more to begin to appreciate the negative side effects of instantaneous egobroadcasting, they also offer all of us the opportunity to begin to counteract our increasing atomisation as individuals. In a world which, thanks to the neoliberal policy-makers of the last thirty years, has seen a demise in the traditional sense of ‘society’, these new social media tools offer us the potential for creating new forms of collectivity. They offer us unprecedented new opportunities for dialogue and exchange, allowing us to find and make connections with like-minded individuals all over the world. But these connections are only meaningful if they are genuinely reciprocal. As artists, strange creatures that we are, we must attempt to keep our egos in check: to give as much as we take, to listen as much as we speak, to learn as much as we teach. Only then can a real support network be born and can we truly find our power in numbers. As we enter this challenging new phase for the arts in the UK and worldwide, at the hand of those same policy-makers, we must learn to utilise our nascent creative social networks to establish solidarity and to continue to find new ways of working outside of the traditional institutions of art, which might not weather the storm. Ellie Harrison is an artist based in Glasgow. The first book about her work Confessions of a Recovering Data Collector was published in 2009. Her project Eat

What the internet lacked in these early guises, however, was the capacity for reciprocation. The one-sidedness of my obsessive publishing did little to alleviate individualism or isolation, to contribute to a sense of solidarity or collectivity, in fact if anything, it exacerbated it. So, in 2006 I made the decision to quit this way of working, dominated by what I had come to term as my data collecting activity, in an attempt to develop a more outwardlooking practice, which focused on more important things happening in the wider world and which placed a greater emphasis on collaboration.

22 is on permanent display at the Wellcome Collection in London. www.ellieharrison.com

Central Station is a creative social network. To document our first phase of existence we decided to create a book. It's a way of celebratin...

Central Station is a creative social network. To document our first phase of existence we decided to create a book. It's a way of celebratin...