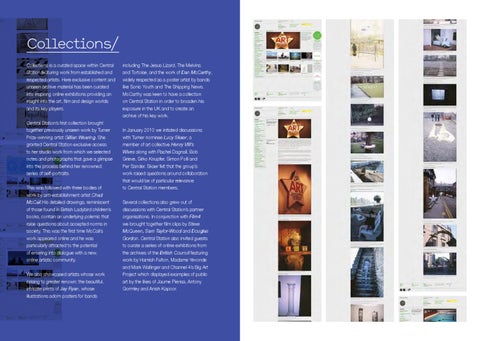 Collections/ Collections is a curated space within Central Station featuring work from established and respected artists. Here exclusive content and unseen archive material has been curated into inspiring online exhibitions providing an insight into the art, film and design worlds and its key players. Central Station’s first collection brought together previously unseen work by Turner Prize-winning artist Gillian Wearing. She granted Central Station exclusive access to her studio work from which we selected notes and photographs that gave a glimpse into the process behind her renowned series of self-portraits. This was followed with three bodies of work by anti-establishment artist Chad McCail.His detailed drawings, reminiscent of those found in British Ladybird children’s books, contain an underlying polemic that raise questions about accepted norms in society. This was the first time McCail’s work appeared online and he was particularly attracted to the potential of entering into dialogue with a new, online artistic community. We also showcased artists whose work isrising to greater renown: the beautiful, intricate prints of Jay Ryan, whose illustrations adorn posters for bands

including The Jesus Lizard, The Melvins and Tortoise, and the work of Dan McCarthy, widely respected as a poster artist by bands like Sonic Youth and The Shipping News. McCarthy was keen to have a collection on Central Station in order to broaden his exposure in the UK and to create an archive of his key work. In January 2010 we initiated discussions with Turner nominee Lucy Skaer, a member of art collective Henry VIII’s Wives along with Rachel Dagnall, Bob Grieve, Sirko Knupfer, Simon Polli and Per Sander. Skaer felt that the group’s work raised questions around collaboration that would be of particular relevance to Central Station members. Several collections also grew out of discussions with Central Station’s partner organisations. In conjunction with Film4 we brought together film clips by Steve McQueen, Sam Taylor-Wood and Douglas Gordon. Central Station also invited guests to curate a series of online exhibitions from the archives of the British Council featuring work by Hamish Fulton, Madame Yevonde and Mark Wallinger and Channel 4’s Big Art Project which displayed examples of public art by the likes of Jaume Plensa, Antony Gormley and Anish Kapoor.