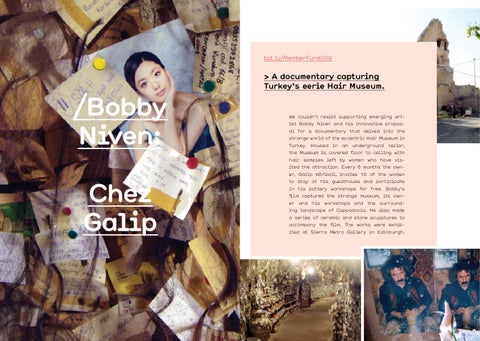 We couldn’t resist supporting emerging artist Bobby Niven and his innovative proposal for a documentary that delved into the strange world of the eccentric Hair Museum in Turkey. Housed in an underground cellar, the Museum is covered floor to ceiling with hair samples left by women who have visited the attraction. Every 6 months the own-

er, Galip Körükcü, invites 10 of the women to stay at his guesthouse and participate in his pottery workshops for free. Bobby’s film captured the strange museum, its owner and his workshops and the surrounding landscape of Cappadocia. He also made a series of ceramic and stone sculptures to accompany the film. The works were exhibited at Sierra Metro Gallery in Edinburgh.