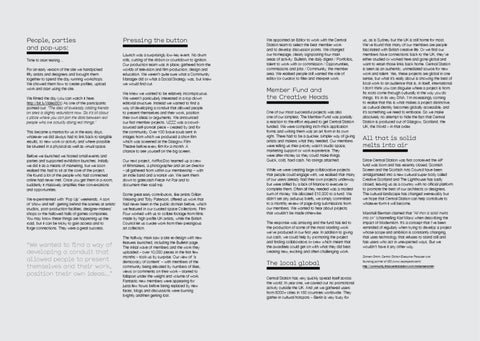 People, parties and pop-ups: Time to start testing… For an early version of the site we handpicked fifty artists and designers and brought them together to spend the day running workshops. We showed them how to create profiles, upload work and start using the site. We filmed the day (you can watch it here: http://bit.ly/Video001) As one of the participants pointed out: “The idea of lovelessly adding friends on sites is slightly redundant now. So it’s all about a place where you can join the dots between real people who are actually doing real things.” This became a mantra for us in the early days; whatever we did always had to link back to tangible results, to new work or activity and where possible be situated in a physical as well as virtual space. Before we launched we hosted small events and parties and supported exhibition launches. Initially we did it as a means of marketing, but we soon realised this had to sit at the core of the project. We found a lot of the people who had connected online had never met. Once you get them in a room, suddenly it massively amplifies their conversations and opportunities. We experimented with ‘Pop Up’ weekends. A sort of ‘show and tell’: getting behind the scenes at artists’ studios, post-production facilities, designer-makers’ shops or the hallowed halls of games companies. You may know these things are happening up the road, but it can be tricky to gain access and to forge connections. They were a great success.

“We wanted to find a way of developing a conduit that allowed people to present themselves and their work, position their own ideas...”

Pressing the button Launch was a surprisingly low-key event. No drum rolls, cutting of the ribbon or countdown to ignition. Our production team was in place; gathered from the worlds of television and film production, design and education. We weren’t quite sure what a Community Manager did or what a Social Strategy was, but knew we would find out. We knew we wanted to be relatively inconspicuous. We weren’t particularly interested in a top-down editorial structure. Instead we wanted to find a way of developing a conduit that allowed people to present themselves and their work, position their own ideas or arguments. We announced our first member projects. UZZZ was a crowdsourced self-portrait piece – created by and for the community. Over 100 brave souls sent in images from which we produced a short film which was screened at the Glasgow Film Theatre before every film for a month. A chance to see yourself on the big screen. Our next project, ArtRocDoc teamed up a crew of filmmakers, a photographer and an art director – all gathered from within our membership – with an indie band and a transit van. We sent them down to gatecrash Frieze Art Fair and to document their road trip. Some great early contributors, like artists Gillian Wearing and Toby Paterson, offered us work that had never been in the public domain before, which we featured in our curated space Collections. Film Four worked with us to collate footage from films made by high profile UK artists, while the British Council let us curate work from their prestigious art collection. The halfway mark saw a site re-design with new features launched, including the Bulletin page. The initial wave of members and the work they uploaded – over 10,000 pieces in the first few months – took us by surprise. Our view of ‘a democracy of content’ – with members of the community being elevated by numbers of likes, views or comments on their work – started to fallapart under the weight and volume of work. Fantastic new members were appearing for justa few hours before being replaced by new faces; blogs and discussions were burning brightly andthen getting lost.

We appointed an Editor to work with the Central Station team to select the best member work and to develop discussion points. We changed our homepage, clearly signposting four main areas of activity: Bulletin, the daily digest / Portfolios, talent to work with or commission / Opportunities, commissions and jobs / Community, the member area. We realised people still wanted the role of editor (or curator) to filter and interpret work.

Member Fund and the Creative Heads One of our most successful projects was also one of our simplest. The Member Fund was partially a reaction to the effort required to get Central Station funded. We were compiling inch-thick application forms and writing them was an art form in its own right. There had to be a quicker, simpler way of giving artists and makers what they needed. Our members were telling us their priority wasn’t studio space, marketing support or work experience. They were after money so they could make things. Quick, cold, hard cash. No strings attached. While we were creating large collaborative projects that people could engage with, we realised that many of our users already had their own projects underway but were stifled by a lack of finance to execute or complete them. Often all they needed was a modest sum of money. We allocated £10,000 to a fund. We didn’t set any arduous briefs, we simply committed to a monthly review of page-long submissions from our members. We wanted to hear about projects that wouldn’t be made otherwise. The response was amazing and the fund has led to the production of some of the most startling work we’ve produced in our first year. In addition to giving out cash, we could help by promoting the project and finding collaborators or crew which meant that the awardees could get on with what they did best: creating new, exciting and often challenging work.

us, as is Sydney but the UK is still home for most. We’ve found that many of our members are people fascinated with British creative life. Or we find our members have connections back to the UK, they’ve either studied or worked here and gone global and want to retain those links back home. Central Station is seen as an authentic, unmediated source for new work and talent. Yes, these projects are global in one sense, but what it’s really about is showing the best of local work to an audience that is, in itself, international. I don’t think you can disguise where a project is from. Its roots come through culturally in the way you do things. It’s in its very DNA. I’m increasingly coming to realise that this is what makes a project distinctive, as cultural identity becomes globally accessible, and it’s something we need to embrace. So we make absolutely no attempt to hide the fact that Central Station is produced out of Glasgow, Scotland, the UK, the World – in that order.

All that is solid melts into air Since Central Station was first conceived the 4iP fund was born and has recently closed; Scottish Screen and the Scottish Arts Council have been amalgamated into a new cultural super body called Creative Scotland and The Lighthouse has sadly closed, leaving us as a country with no official platform to promote the best of our architects or designers. The cultural landscape has changed irretrievably but we hope that Central Station can help contribute to whatever form it will become. Marshall Berman claimed that “All that is solid melts into air” (channelling Karl Marx) when describing the impact of Modernism. It’s a concept that I’ve been reminded of regularly when trying to develop a project whose scope and ambition is constantly changing, that uses technology that refuses to stand still and has users who act in unexpected ways. But we wouldn’t have it any other way. Damien Smith, Central Station Executive Producer and

The local global Central Station has very quickly spread itself across the world. In year one, we carried out no promotional activity outside the UK. And yet we gathered users from 5000+ cities in 150 countries worldwide. They gather in cultural hotspots – Berlin is very busy for