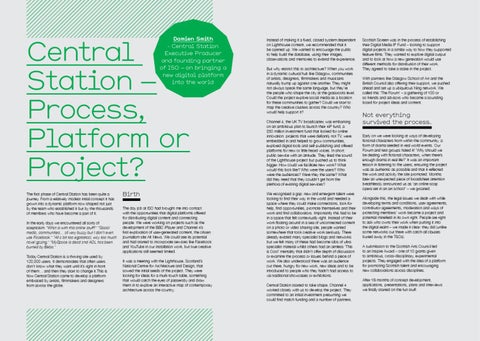 The first phase of Central Station has been quite a journey. From a relatively modest initial concept it has grown into a dynamic platform now shaped not just by the team who established it but by the thousands of members who have become a part of it. In the early days we encountered all sorts of scepticism: “What is with this online stuff?” “Social media, communities… all very buzzy but I don’t even use Facebook.” “All a bit too egotistical, way too much navel gazing.” “MySpace is dead and AOL has been burned by Bebo.” Today Central Station is a thriving site used by 120,000 users. It demonstrates that often users don’t know what they want until it’s right in front of them… and then they start to change it.This is how Central Station came to develop a platform embraced by artists, filmmakers and designers from across the globe.

Birth The day job at ISO had brought me into contact with the opportunities that digital platforms offered for distributing digital content and connecting people. We were working on projects such as the development of the BBC iPlayer and Channel 4’s first exploration of user-generated content, the citizen journalism site Alt News. We could see its potential and had started to incorporate services like Facebook and YouTube in our installation work, but true creative applications still seemed limited. It was a meeting with the Lighthouse, Scotland’s National Centre for Architecture and Design, that sowed the initial seeds of the project. They were looking for ideas for a multi-touch table, something that would catch the eyes of passersby and draw them in to explore an interactive map of contemporary architecture across the country.

Instead of making it a fixed, closed system dependent on Lighthouse content, we recommended that it be opened up. We wanted to encourage the public to help build the database, using their images, observations and memories to extend the experience. But why restrict this to architecture? When you work in a dynamic cultural hub like Glasgow, communities of artists, designers, filmmakers and musicians naturally bump up against one another. They might not always speak the same language, but they’re the people who shape the city at the grassroots level. Could the project explore social media as a location for these communities to gather? Could we start to map the creative clusters across the country? Who would help support it? Channel 4, the UK TV broadcaster, was embarking on an ambitious plan to launch their 4iP fund, a £50 million investment fund that looked for online innovation: projects that were defiantly not TV, were embedded in and helped to grow communities, explored digital tools and self-publishing and offered platforms for new or little heard voices. In short: public service with an attitude. They liked the sound of the Lighthouse project but pushed us to think bigger. How could we facilitate new work? What would this look like? Who were the users? Who were the audiences? Were they the same? What did they need that they couldn’t get from the plethora of existing digital services? We recognised a gap: new and emergent talent were looking to find their way in the world and needed a space where they could make connections, look for help, find opportunities, promote themselves and their work and find collaborators. Importantly this had to be in a space that felt contextually right. Instead of their work floating around in a sea of unconnected content on a photo or video sharing site, people wanted somewhere that took creative work seriously. There already existed many specialist blogs and networks but we felt many of these had become silos of ultra specialist material whilst others had an aimless ‘This is Cool’ mentality that didn’t offer depth of discussion or examine the process or issues behind a piece of work. We also understood there was an audience out there, hungry for new work, new ideas and to be introduced to people who they hadn’t had access to via traditional showcases or exhibitions. Central Station started to take shape. Channel 4 worked closely with us to develop the project. They committed to an initial investment presuming we could find match funding and a number of partners.

Scottish Screen was in the process of establishing their Digital Media IP Fund – looking to support digital projects in a similar way to how they supported feature films. They wanted to explore digital output and to look at how a new generation would use different methods for distribution of their work. They agreed to take a stake in the project. With partners like Glasgow School of Art and the British Council also offering their support, we pushed ahead and set up a ubiquitous Ning network. We called this ‘The Forum’ – a gathering of 100 or so friends and advisors who became a sounding board for project ideas and content.

Not everything survived the process. Early on we were looking at ways of developing fictional characters from within the community; a form of drama seeded in real world events. Our Forum and test groups hated it! ‘Why should we be dealing with fictional characters, when there’s enough drama in real life?’ It was an important lesson in listening to the users, ensuring the project was as authentic as possible and that it reflected the work and activity the site promoted. Months later an unexpected piece of broadsheet attention breathlessly announced us as ‘an online soap opera set in an art school” – we groaned. Alongside this, the legal issues we dealt with while developing terms and conditions, user agreements, contributor agreements, moderation and ways of protecting members’ work became a project and potential minefield in its own right. People are right to ask who owns their work when putting it into the digital realm – we made it clear: they did (unlike some networks out there with catch-all clauses buried away in the T&amp;Cs). A submission to the Scottish Arts Council led to an Inspire Award – one of 10 grants given to ambitious, cross-disciplinary, experimental projects. They engaged with the idea of a platform for promoting Scottish talent and encouraging new collaborations across disciplines. After 18 months of concept development, applications, presentations, plans and interviews we finally started on the fun stuff.