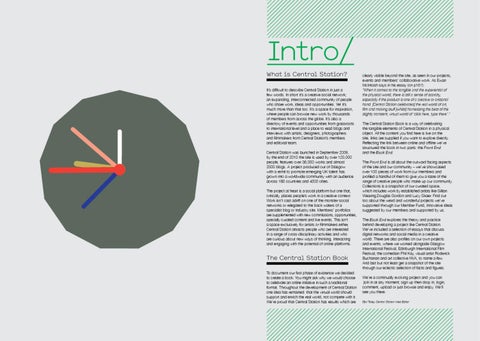 Intro/ What is Central Station? It’s difficult to describe Central Station in just a few words. In short it’s a creative social network; an expanding, interconnected community of people who share work, ideas and opportunities. Yet it’s much more than that too. It’s a space for inspiration, where people can browse new work by thousands of members from across the globe. It’s also a directory of events and opportunities from grassroots to international level and a place to read blogs and interviews with artists, designers, photographers and filmmakers from Central Station’s members and editorial team. Central Station was launched in September 2009, by the end of 2010 the site is used by over 120,000 people, features over 35,000 works and almost 2000 blogs. A project produced out of Glasgow with a remit to promote emerging UK talent has grown into a worldwide community with an audience across 180 countries and 4000 cities. The project at heart is a social platform but one that, critically, places people’s work in a creative context. Work isn’t cast adrift on one of the monster social networks or relegated to the back waters of a specialist blog or industry site. Members’ portfolios are supplemented with new commissions, opportunities, specially curated content and live events. This isn’t a space exclusively for artists or filmmakers either, Central Station attracts people who are interested in a range of cross-disciplinary activities and who are curious about new ways of thinking, interacting and engaging with the potential of online platforms.

The Central Station Book To document our first phase of existence we decided to create a book. You might ask why we would choose to celebrate an online initiative in such a traditional format. Throughout the development of Central Station one idea has remained: that the virtual world should support and enrich the real world, not compete with it. We’re proud that Central Station has results which are

clearly visible beyond the site, as seen in our projects, events and members’ collaborative work. As Ewan McIntosh says in his essay (on p157): “When it comes to the tangible and the experiential of the physical world, there is still a sense of scarcity, especially if the product is one of a creative or artisanal hand. [Central Station celebrates] the real world of art, film and making stuff [whilst] harnessing the best of the slightly transient, virtual world of ‘click here, type there’.” The Central Station Book is a way of celebrating the tangible elements of Central Station in a physical object. All the content you find here is live on the site, links are supplied if you want to explore directly. Reflecting the link between online and offline we’ve structured the book in two parts: the Front End and the Back End. The Front End is all about the outward facing aspects of the site and our community – we’ve showcased over 100 pieces of work from our members and profiled a handful of them to give you a taste of the range of creative people who make up our community. Collections is a snapshot of our curated space, which includes work by established artists like Gillian Wearing,Douglas Gordon and Lucy Skaer. Find out too about the weird and wonderful projects we’ve supported through our Member Fund, innovative ideas suggested by our members and supported by us. The Back End explores the theory and practice behind developing a project like Central Station. We’ve included a selection of essays that discuss digital networks and social media in a creative world. There are also profiles on our own projects and events, where we worked alongside Glasgow International Festival, Edinburgh International Film Festival, the comedian Phil Kay, visual artist Roderick Buchanan and art collective NVA, to name a few. And last but not least get a snapshot of the site through our eclectic selection of facts and figures. We’re a continually evolving project and you can join in at any moment; sign up then drop in, login, comment, upload or just browse and enjoy. We’ll see you there. Gail Tolley, Central Station Web Editor