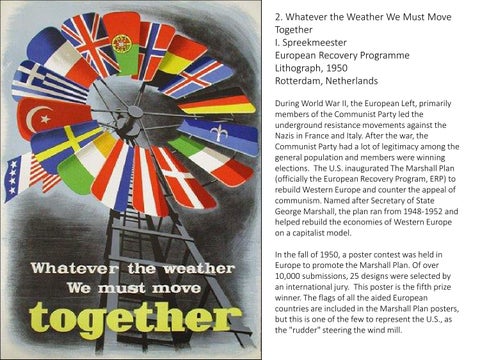 2. Whatever the Weather We Must Move Together I. Spreekmeester European Recovery Programme Lithograph, 1950 Rotterdam, Netherlands During World War II, the European Left, primarily members of the Communist Party led the underground resistance movements against the Nazis in France and Italy. After the war, the Communist Party had a lot of legitimacy among the general population and members were winning elections. The U.S. inaugurated The Marshall Plan (officially the European Recovery Program, ERP) to rebuild Western Europe and counter the appeal of communism. Named after Secretary of State George Marshall, the plan ran from 1948-1952 and helped rebuild the economies of Western Europe on a capitalist model. In the fall of 1950, a poster contest was held in Europe to promote the Marshall Plan. Of over 10,000 submissions, 25 designs were selected by an international jury. This poster is the fifth prize winner. The flags of all the aided European countries are included in the Marshall Plan posters, but this is one of the few to represent the U.S., as the &quot;rudder&quot; steering the wind mill. 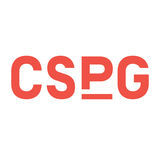 Center for the Study of Political Graphics
Go explore