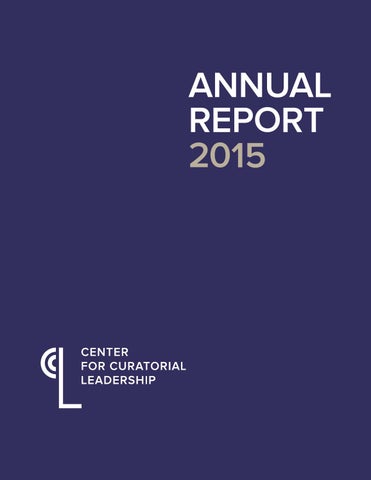 The demands of curatorial and higher leadership positions at art museums are more complex than ever. In 2015, the Center for Curatorial Leadership (CCL) offered three programs designed to prepare the curators of today and tomorrow to meet these challenges and strengthen our art institutions for the future. •

“This was a very dynamic year for CCL — one in which transformative things occurred. A couple of outstanding moments: When students from our Ph.D. program and CCL Fellows interacted with unexpected energy at a February ELIZABETH EASTON Director and Co-Founder, CCL

event, resulting in real jobs, and when Ghetto Film School students from the South Bronx filmed at The Frick Collection under the auspices of CCL’s diversity mentoring project. I hope to keep inside me forever the memory of the focus, maturity, and confidence those students had while filming the movie they masterminded from start to finish. Seeing them work was one of the great experiences in my professional life.”

departmental collaborations, technology initiatives, and fundraising campaigns. For the 2015 class, CCL selected 12 curators from a competitive pool of some 50 applicants representing a wide range of specialty fields, from Byzantine to Native American art. The inclusion of two Fellows with directorial responsibilities enriched and expanded dialogue throughout the program (see Appendix for a list of Fellows). Through a synthesis of theory and practice, the program’s five-month curriculum addresses the major functional areas museum leaders oversee. Beginning with a two-week intensive in New York, curators take part in courses led by Columbia Business School, practicums, residencies, and more. Highlights from CCL 2015: •

o r g a n i z at i o n a l i m pac t to o l , a new peer-learning project that asks curators to articulate a current professional challenge, write a case study to share with teammates, and devise short- and long-term strategies for implementing changes.

panel and discussion with philanthropic leaders on highimpact funding, hosted by the Blackstone Charitable Foundation and including representatives from The Andrew W. Mellon Foundation, Ford Foundation, and Terra Foundation for American Art.

google creative lab discussion with the Lab’s Executive Creative Director on how to incubate ideas and drive innovative change.

DIVERSITY AND THE CURATORIAL FIELD

CL is dedicated to offering a curriculum that responds to the most important issues facing the field. Addressing the lack of diversity in museum curatorial and leadership positions is a key

priority for CCL. Among other projects, CCL Fellows mentor students from communities underrepresented in the curatorial field. In one 2015 mentorship, Xavier Salomon, Peter Jay Sharp Chief Curator of The Frick Collection, partnered with the Ghetto Film School (GFS), a South Bronx–based film program for high school students. For five months, Salomon taught weekly three-hour art history classes to GFS students when the museum was closed to the public. The lessons aided the students’ understanding of narrative in visual art and filmmaking. The students then wrote, directed, filmed, and edited the first movie ever made at the Frick Collection, inspired by Fragonard’s Progress of Love. In a January 2016 The New York Times article profiling the GFS/Frick collaboration, CCL Director, Elizabeth Easton reflected: “There’s a lot of privilege in the museum world. We have to change the game.” Easton was named to a task force organized by the Ford Foundation and the Crystal Bridges Museum of American Art that is focused on cultural diversity in American museums, further promoting CCL as an active voice in the broader field.

Mellon Foundation Seminar in Curatorial Practice provides students with much-needed opportunities to engage directly with museums and objectbased research, as well as take introductory courses in relevant business principles. Armed with this knowledge, students are better prepared to analyze their career options. After receiving nearly 200 applications in 2014, CCL decided to narrow eligibility to students in the final stages of their dissertation research. In 2015, the program once again received a highly competitive pool of applicants—approximately 80 students—and selected 15 for the cohort (see Appendix for list of participants), seven of whom came from underrepresented backgrounds. By connecting these talented students to leading museum professionals, CCL seeks to encourage their involvement in the sector—ultimately expanding the diversity of leadership in museums. With New York’s renowned museums as classrooms, the 2015 program immersed the students in art institutions of different scales and missions.

Highlights from the 2015 CCL/Mellon Seminar: •

t r a i n i n g w i t h c o lu m b i a b u s i n e s s s c h o o l , which took Seminar participants out of their academic and curatorial comfort zones for lessons in negotiation and building social capital.

providing unique opportunities for students to expand their understanding of the curatorial field and clarify their career goals. •

i n c r e a s e d f o c u s o n n o n - w e s t e r n a r t, including a behindthe-scenes tour of the Met’s exhibition “China: Through the Looking Glass” and a discussion about collecting and stewardship with Maxwell K. Hearn, Douglas Dillon Chairman of the Department of Asian Art and member of CCL leadership class of 2009.

t e a m - b a s e d p r ac t i c u m that challenged students to assess the mission alignment of four New York City institutions: the Museum of Arts and Design, The Morgan Library & Museum, the Hispanic Society of America, and the New Museum of Contemporary Art. Philippe de Montebello, Director Emeritus of The Metropolitan Museum of Art, moderated the students’ final presentations.

The seeds of the first pilot years of the Seminar have produced exciting results, including:

Akili Tommasino (Harvard University, CCL/Mellon 2014), who was mentored by two curators of Painting and Sculpture at MoMA, Leah Dickerman, a CCL graduate and The Marlene Hess Curator, and Anne Umland, The Blanchette Hooker Rockefeller Curator, was selected as Curatorial Assistant in their department in 2014.

Natalie Musteata (The Graduate Center, CUNY, CCL/Mellon 2014) was nominated for the Bonaldi Art Prize for curatorial innovation in 2015.

In 2014, Julia McHugh (UCLA, CCL/Mellon 2014), who was mentored by Ronda Kasl, Curator of Colonial Latin American Art at The Metropolitan Museum of Art, secured a Douglass Foundation Fellowship in American Art at the museum.

Claire Brandon (Institute of Fine Arts, NYU, CCL/Mellon 2014) was selected to serve as research assistant for the William Copley exhibition organized by the Menil Collection and the Fondazione Prada.

Kimberli Gant (University of Texas, Austin, CCL/Mellon 2014) was named a Mellon Predoctoral Fellow at the Newark Museum of Art, working on a collection reinstallation with Christa Clarke, a CCL leadership graduate and Senior Curator, Arts of Global Africa.

â&#x20AC;&#x153;I am so excited to see CCL grow and have its various programs energize each other. Young people who participate in the new Ph.D. program are being mentored by senior curators, the alumni of our core program. The students are getting AGNES GUND Co-Founder and Chair, CCL

inspiration, they are getting ideas, and they are getting jobs! Best of all, these young professionals are invigorating the field with their energy, their inventiveness, and their vision for the future of museums.â&#x20AC;?

n 2014, MoMA invited CCL to design a two-week intensive program for global curators based on CCL’s successful leadership training model. The aim of the International Curatorial Institute is to develop

participants’ capacity to tackle strategic issues facing 21st-century arts organizations around the world. This past September, ten international curators and two representatives from MoMA convened in New York City for the second iteration of the program. Hailing from a variety of art spaces in China, Greece, India, Israel, Korea, Nigeria, Palestine, Poland, Russia, and Senegal, the visiting curators represented a vast set of perspectives and are all pioneering figures in the global art community (see Appendix for a list of the curators.) Bringing together these top thinkers prompted vibrant exchanges about the challenges present in their local contexts, as well as the seismic transformations taking place in the world’s contemporary art landscape. Each morning, Columbia Business School instructors taught classes on topics such as strategic thinking, team building, and negotiation. Lunch and afternoon sessions provided in-depth exposure to the inner workings of MoMA and to the activities of prominent leaders, philanthropists, and collectors from New York City. Collaborating with MoMA on the Institute presents a significant opportunity for CCL to customize its primary training model to align with the needs of global constituents.

n 2016—CCL’s ninth year of curatorial training—the organization will continue to strengthen each of its programs, as well as find meaningful ways to mark its upcoming tenth

anniversary. In anticipation of this significant event, CCL has held preliminary conversations with alumni to assess what new programs or resources should be developed to mark a decade of curatorial training and propel the next ten years. One distinguishing factor alumni have highlighted is that CCL is the only organization to bring together students, curators, and museum directors in a collegial, learning environment. In 2016, CCL plans to capitalize on the unique demographics of its alumni base by organizing gatherings that foster cross-generational connections and further strengthen CCL’s distinguished network. For the core program in particular, CCL will call upon its alumni base of nearly 150 professionals to research what their future needs might look like. By providing additional learning opportunities, CCL can enhance its capacity to be a center for innovative ideas for the field.

CCL would like to thank the following foundations, trusts, and individuals who have made our programs possible in 2015 The Andrew W. Mellon Foundation

Theodore R. and Barbara B. Aronson 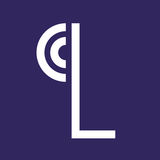