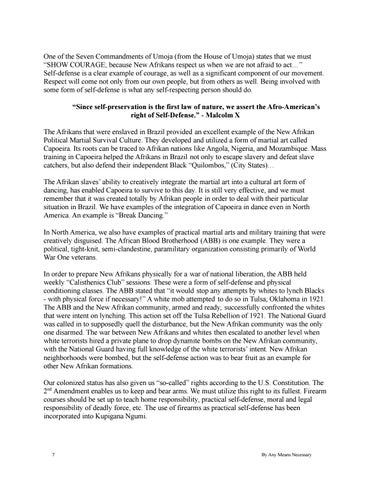 One of the Seven Commandments of Umoja (from the House of Umoja) states that we must “SHOW COURAGE; because New Afrikans respect us when we are not afraid to act…” Self-defense is a clear example of courage, as well as a significant component of our movement. Respect will come not only from our own people, but from others as well. Being involved with some form of self-defense is what any self-respecting person should do. “Since self-preservation is the first law of nature, we assert the Afro-American’s right of Self-Defense.” - Malcolm X The Afrikans that were enslaved in Brazil provided an excellent example of the New Afrikan Political Martial Survival Culture. They developed and utilized a form of martial art called Capoeira. Its roots can be traced to Afrikan nations like Angola, Nigeria, and Mozambique. Mass training in Capoeira helped the Afrikans in Brazil not only to escape slavery and defeat slave catchers, but also defend their independent Black “Quilombos,” (City States)… The Afrikan slaves’ ability to creatively integrate the martial art into a cultural art form of dancing, has enabled Capoeira to survive to this day. It is still very effective, and we must remember that it was created totally by Afrikan people in order to deal with their particular situation in Brazil. We have examples of the integration of Capoeira in dance even in North America. An example is “Break Dancing.” In North America, we also have examples of practical martial arts and military training that were creatively disguised. The African Blood Brotherhood (ABB) is one example. They were a political, tight-knit, semi-clandestine, paramilitary organization consisting primarily of World War One veterans. In order to prepare New Afrikans physically for a war of national liberation, the ABB held weekly “Calisthenics Club” sessions. These were a form of self-defense and physical conditioning classes. The ABB stated that “it would stop any attempts by whites to lynch Blacks - with physical force if necessary!” A white mob attempted to do so in Tulsa, Oklahoma in 1921. The ABB and the New Afrikan community, armed and ready, successfully confronted the whites that were intent on lynching. This action set off the Tulsa Rebellion of 1921. The National Guard was called in to supposedly quell the disturbance, but the New Afrikan community was the only one disarmed. The war between New Afrikans and whites then escalated to another level when white terrorists hired a private plane to drop dynamite bombs on the New Afrikan community, with the National Guard having full knowledge of the white terrorists’ intent. New Afrikan neighborhoods were bombed, but the self-defense action was to bear fruit as an example for other New Afrikan formations. Our colonized status has also given us “so-called” rights according to the U.S. Constitution. The 2nd Amendment enables us to keep and bear arms. We must utilize this right to its fullest. Firearm courses should be set up to teach home responsibility, practical self-defense, moral and legal responsibility of deadly force, etc. The use of firearms as practical self-defense has been incorporated into Kupigana Ngumi.