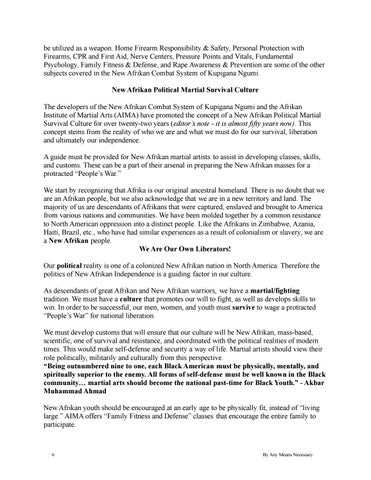 be utilized as a weapon. Home Firearm Responsibility &amp; Safety, Personal Protection with Firearms, CPR and First Aid, Nerve Centers, Pressure Points and Vitals, Fundamental Psychology, Family Fitness &amp; Defense, and Rape Awareness &amp; Prevention are some of the other subjects covered in the New Afrikan Combat System of Kupigana Ngumi. New Afrikan Political Martial Survival Culture The developers of the New Afrikan Combat System of Kupigana Ngumi and the Afrikan Institute of Martial Arts (AIMA) have promoted the concept of a New Afrikan Political Martial Survival Culture for over twenty-two years (editor’s note - it is almost fifty years now). This concept stems from the reality of who we are and what we must do for our survival, liberation and ultimately our independence. A guide must be provided for New Afrikan martial artists to assist in developing classes, skills, and customs. These can be a part of their arsenal in preparing the New Afrikan masses for a protracted “People’s War.” We start by recognizing that Afrika is our original ancestral homeland. There is no doubt that we are an Afrikan people, but we also acknowledge that we are in a new territory and land. The majority of us are descendants of Afrikans that were captured, enslaved and brought to America from various nations and communities. We have been molded together by a common resistance to North American oppression into a distinct people. Like the Afrikans in Zimbabwe, Azania, Haiti, Brazil, etc., who have had similar experiences as a result of colonialism or slavery, we are a New Afrikan people. We Are Our Own Liberators! Our political reality is one of a colonized New Afrikan nation in North America. Therefore the politics of New Afrikan Independence is a guiding factor in our culture. As descendants of great Afrikan and New Afrikan warriors, we have a martial/fighting tradition. We must have a culture that promotes our will to fight, as well as develops skills to win. In order to be successful, our men, women, and youth must survive to wage a protracted “People’s War” for national liberation. We must develop customs that will ensure that our culture will be New Afrikan, mass-based, scientific, one of survival and resistance, and coordinated with the political realities of modern times. This would make self-defense and security a way of life. Martial artists should view their role politically, militarily and culturally from this perspective. “Being outnumbered nine to one, each Black American must be physically, mentally, and spiritually superior to the enemy. All forms of self-defense must be well known in the Black community… martial arts should become the national past-time for Black Youth.” - Akbar Muhammad Ahmad New Afrikan youth should be encouraged at an early age to be physically fit, instead of “living large.” AIMA offers “Family Fitness and Defense” classes that encourage the entire family to participate.