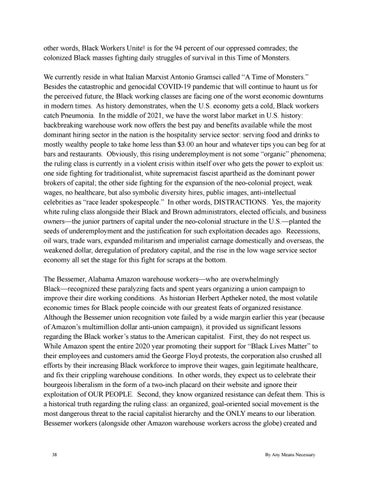 other words, Black Workers Unite! is for the 94 percent of our oppressed comrades; the colonized Black masses fighting daily struggles of survival in this Time of Monsters. We currently reside in what Italian Marxist Antonio Gramsci called “A Time of Monsters.” Besides the catastrophic and genocidal COVID-19 pandemic that will continue to haunt us for the perceived future, the Black working classes are facing one of the worst economic downturns in modern times. As history demonstrates, when the U.S. economy gets a cold, Black workers catch Pneumonia. In the middle of 2021, we have the worst labor market in U.S. history: backbreaking warehouse work now offers the best pay and benefits available while the most dominant hiring sector in the nation is the hospitality service sector: serving food and drinks to mostly wealthy people to take home less than $3.00 an hour and whatever tips you can beg for at bars and restaurants. Obviously, this rising underemployment is not some “organic” phenomena; the ruling class is currently in a violent crisis within itself over who gets the power to exploit us: one side fighting for traditionalist, white supremacist fascist apartheid as the dominant power brokers of capital; the other side fighting for the expansion of the neo-colonial project, weak wages, no healthcare, but also symbolic diversity hires, public images, anti-intellectual celebrities as “race leader spokespeople.” In other words, DISTRACTIONS. Yes, the majority white ruling class alongside their Black and Brown administrators, elected officials, and business owners—the junior partners of capital under the neo-colonial structure in the U.S.—planted the seeds of underemployment and the justification for such exploitation decades ago. Recessions, oil wars, trade wars, expanded militarism and imperialist carnage domestically and overseas, the weakened dollar, deregulation of predatory capital, and the rise in the low wage service sector economy all set the stage for this fight for scraps at the bottom. The Bessemer, Alabama Amazon warehouse workers—who are overwhelmingly Black—recognized these paralyzing facts and spent years organizing a union campaign to improve their dire working conditions. As historian Herbert Aptheker noted, the most volatile economic times for Black people coincide with our greatest feats of organized resistance. Although the Bessemer union recognition vote failed by a wide margin earlier this year (because of Amazon’s multimillion dollar anti-union campaign), it provided us significant lessons regarding the Black worker’s status to the American capitalist. First, they do not respect us. While Amazon spent the entire 2020 year promoting their support for “Black Lives Matter” to their employees and customers amid the George Floyd protests, the corporation also crushed all efforts by their increasing Black workforce to improve their wages, gain legitimate healthcare, and fix their crippling warehouse conditions. In other words, they expect us to celebrate their bourgeois liberalism in the form of a two-inch placard on their website and ignore their exploitation of OUR PEOPLE. Second, they know organized resistance can defeat them. This is a historical truth regarding the ruling class: an organized, goal-oriented social movement is the most dangerous threat to the racial capitalist hierarchy and the ONLY means to our liberation. Bessemer workers (alongside other Amazon warehouse workers across the globe) created and