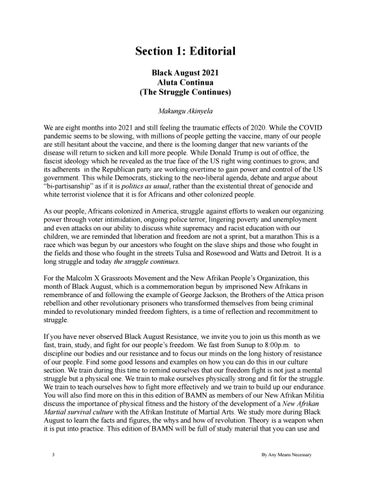 Section 1: Editorial Black August 2021 Aluta Continua (The Struggle Continues) Makungu Akinyela We are eight months into 2021 and still feeling the traumatic effects of 2020. While the COVID pandemic seems to be slowing, with millions of people getting the vaccine, many of our people are still hesitant about the vaccine, and there is the looming danger that new variants of the disease will return to sicken and kill more people. While Donald Trump is out of office, the fascist ideology which he revealed as the true face of the US right wing continues to grow, and its adherents in the Republican party are working overtime to gain power and control of the US government. This while Democrats, sticking to the neo-liberal agenda, debate and argue about “bi-partisanship” as if it is politics as usual, rather than the existential threat of genocide and white terrorist violence that it is for Africans and other colonized people. As our people, Africans colonized in America, struggle against efforts to weaken our organizing power through voter intimidation, ongoing police terror, lingering poverty and unemployment and even attacks on our ability to discuss white supremacy and racist education with our children, we are reminded that liberation and freedom are not a sprint, but a marathon.This is a race which was begun by our ancestors who fought on the slave ships and those who fought in the fields and those who fought in the streets Tulsa and Rosewood and Watts and Detroit. It is a long struggle and today the struggle continues. For the Malcolm X Grassroots Movement and the New Afrikan People’s Organization, this month of Black August, which is a commemoration begun by imprisoned New Afrikans in remembrance of and following the example of George Jackson, the Brothers of the Attica prison rebellion and other revolutionary prisoners who transformed themselves from being criminal minded to revolutionary minded freedom fighters, is a time of reflection and recommitment to struggle. If you have never observed Black August Resistance, we invite you to join us this month as we fast, train, study, and fight for our people’s freedom. We fast from Sunup to 8:00p.m. to discipline our bodies and our resistance and to focus our minds on the long history of resistance of our people. Find some good lessons and examples on how you can do this in our culture section. We train during this time to remind ourselves that our freedom fight is not just a mental struggle but a physical one. We train to make ourselves physically strong and fit for the struggle. We train to teach ourselves how to fight more effectively and we train to build up our endurance. You will also find more on this in this edition of BAMN as members of our New Afrikan Militia discuss the importance of physical fitness and the history of the development of a New Afrikan Martial survival culture with the Afrikan Institute of Martial Arts. We study more during Black August to learn the facts and figures, the whys and how of revolution. Theory is a weapon when it is put into practice. This edition of BAMN will be full of study material that you can use and