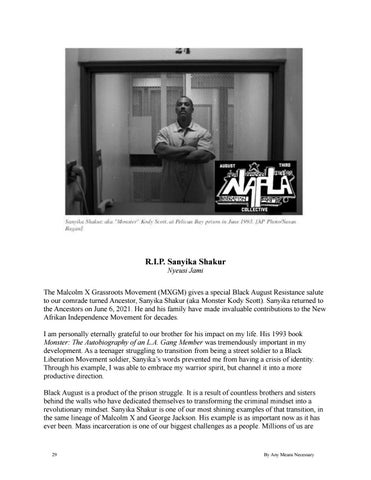 R.I.P. Sanyika Shakur Nyeusi Jami The Malcolm X Grassroots Movement (MXGM) gives a special Black August Resistance salute to our comrade turned Ancestor, Sanyika Shakur (aka Monster Kody Scott). Sanyika returned to the Ancestors on June 6, 2021. He and his family have made invaluable contributions to the New Afrikan Independence Movement for decades. I am personally eternally grateful to our brother for his impact on my life. His 1993 book Monster: The Autobiography of an L.A. Gang Member was tremendously important in my development. As a teenager struggling to transition from being a street soldier to a Black Liberation Movement soldier, Sanyika’s words prevented me from having a crisis of identity. Through his example, I was able to embrace my warrior spirit, but channel it into a more productive direction. Black August is a product of the prison struggle. It is a result of countless brothers and sisters behind the walls who have dedicated themselves to transforming the criminal mindset into a revolutionary mindset. Sanyika Shakur is one of our most shining examples of that transition, in the same lineage of Malcolm X and George Jackson. His example is as important now as it has ever been. Mass incarceration is one of our biggest challenges as a people. Millions of us are