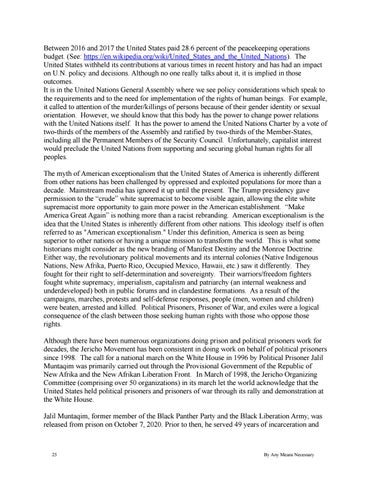 Between 2016 and 2017 the United States paid 28.6 percent of the peacekeeping operations budget. (See: https://en.wikipedia.org/wiki/United_States_and_the_United_Nations). The United States withheld its contributions at various times in recent history and has had an impact on U.N. policy and decisions. Although no one really talks about it, it is implied in those outcomes. It is in the United Nations General Assembly where we see policy considerations which speak to the requirements and to the need for implementation of the rights of human beings. For example, it called to attention of the murder/killings of persons because of their gender identity or sexual orientation. However, we should know that this body has the power to change power relations with the United Nations itself. It has the power to amend the United Nations Charter by a vote of two-thirds of the members of the Assembly and ratified by two-thirds of the Member-States, including all the Permanent Members of the Security Council. Unfortunately, capitalist interest would preclude the United Nations from supporting and securing global human rights for all peoples. The myth of American exceptionalism that the United States of America is inherently different from other nations has been challenged by oppressed and exploited populations for more than a decade. Mainstream media has ignored it up until the present. The Trump presidency gave permission to the “crude” white supremacist to become visible again, allowing the elite white supremacist more opportunity to gain more power in the American establishment. “Make America Great Again” is nothing more than a racist rebranding. American exceptionalism is the idea that the United States is inherently different from other nations. This ideology itself is often referred to as &quot;American exceptionalism.&quot; Under this definition, America is seen as being superior to other nations or having a unique mission to transform the world. This is what some historians might consider as the new branding of Manifest Destiny and the Monroe Doctrine. Either way, the revolutionary political movements and its internal colonies (Native Indigenous Nations, New Afrika, Puerto Rico, Occupied Mexico, Hawaii, etc.) saw it differently. They fought for their right to self-determination and sovereignty. Their warriors/freedom fighters fought white supremacy, imperialism, capitalism and patriarchy (an internal weakness and underdeveloped) both in public forums and in clandestine formations. As a result of the campaigns, marches, protests and self-defense responses, people (men, women and children) were beaten, arrested and killed. Political Prisoners, Prisoner of War, and exiles were a logical consequence of the clash between those seeking human rights with those who oppose those rights. Although there have been numerous organizations doing prison and political prisoners work for decades, the Jericho Movement has been consistent in doing work on behalf of political prisoners since 1998. The call for a national march on the White House in 1996 by Political Prisoner Jalil Muntaqim was primarily carried out through the Provisional Government of the Republic of New Afrika and the New Afrikan Liberation Front. In March of 1998, the Jericho Organizing Committee (comprising over 50 organizations) in its march let the world acknowledge that the United States held political prisoners and prisoners of war through its rally and demonstration at the White House. Jalil Muntaqim, former member of the Black Panther Party and the Black Liberation Army, was released from prison on October 7, 2020. Prior to then, he served 49 years of incarceration and