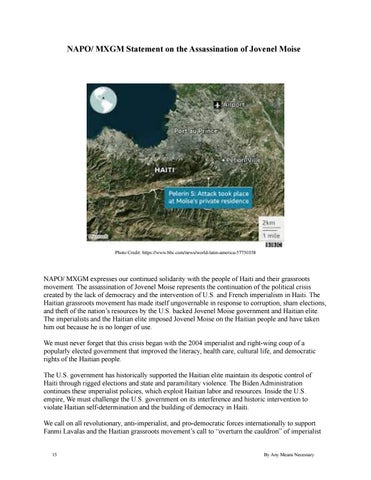 NAPO/ MXGM Statement on the Assassination of Jovenel Moise

NAPO/ MXGM expresses our continued solidarity with the people of Haiti and their grassroots movement. The assassination of Jovenel Moise represents the continuation of the political crisis created by the lack of democracy and the intervention of U.S. and French imperialism in Haiti. The Haitian grassroots movement has made itself ungovernable in response to corruption, sham elections, and theft of the nation’s resources by the U.S. backed Jovenel Moise government and Haitian elite. The imperialists and the Haitian elite imposed Jovenel Moise on the Haitian people and have taken him out because he is no longer of use. We must never forget that this crisis began with the 2004 imperialist and right-wing coup of a popularly elected government that improved the literacy, health care, cultural life, and democratic rights of the Haitian people. The U.S. government has historically supported the Haitian elite maintain its despotic control of Haiti through rigged elections and state and paramilitary violence. The Biden Administration continues these imperialist policies, which exploit Haitian labor and resources. Inside the U.S. empire, We must challenge the U.S. government on its interference and historic intervention to violate Haitian self-determination and the building of democracy in Haiti. We call on all revolutionary, anti-imperialist, and pro-democratic forces internationally to support Fanmi Lavalas and the Haitian grassroots movement’s call to “overturn the cauldron” of imperialist 15