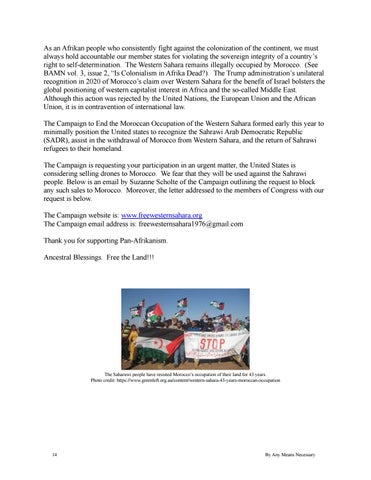 As an Afrikan people who consistently fight against the colonization of the continent, we must always hold accountable our member states for violating the sovereign integrity of a country’s right to self-determination. The Western Sahara remains illegally occupied by Morocco. (See BAMN vol. 3, issue 2, “Is Colonialism in Afrika Dead?). The Trump administration’s unilateral recognition in 2020 of Morocco’s claim over Western Sahara for the benefit of Israel bolsters the global positioning of western capitalist interest in Africa and the so-called Middle East. Although this action was rejected by the United Nations, the European Union and the African Union, it is in contravention of international law. The Campaign to End the Moroccan Occupation of the Western Sahara formed early this year to minimally position the United states to recognize the Sahrawi Arab Democratic Republic (SADR), assist in the withdrawal of Morocco from Western Sahara, and the return of Sahrawi refugees to their homeland. The Campaign is requesting your participation in an urgent matter, the United States is considering selling drones to Morocco. We fear that they will be used against the Sahrawi people. Below is an email by Suzanne Scholte of the Campaign outlining the request to block any such sales to Morocco. Moreover, the letter addressed to the members of Congress with our request is below. The Campaign website is: www.freewesternsahara.org The Campaign email address is: freewesternsahara1976@gmail.com Thank you for supporting Pan-Afrikanism. Ancestral Blessings. Free the Land!!!

The Saharawi people have resisted Morocco’s occupation of their land for 43 years. Photo credit: https://www.greenleft.org.au/content/western-sahara-43-years-moroccan-occupation