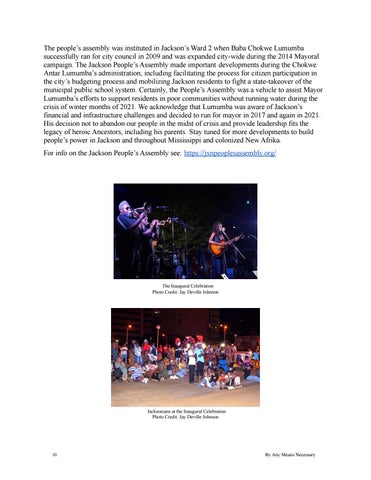 The people’s assembly was instituted in Jackson’s Ward 2 when Baba Chokwe Lumumba successfully ran for city council in 2009 and was expanded city-wide during the 2014 Mayoral campaign. The Jackson People’s Assembly made important developments during the Chokwe Antar Lumumba’s administration, including facilitating the process for citizen participation in the city’s budgeting process and mobilizing Jackson residents to fight a state-takeover of the municipal public school system. Certainly, the People’s Assembly was a vehicle to assist Mayor Lumumba’s efforts to support residents in poor communities without running water during the crisis of winter months of 2021. We acknowledge that Lumumba was aware of Jackson’s financial and infrastructure challenges and decided to run for mayor in 2017 and again in 2021. His decision not to abandon our people in the midst of crisis and provide leadership fits the legacy of heroic Ancestors, including his parents. Stay tuned for more developments to build people’s power in Jackson and throughout Mississippi and colonized New Afrika. For info on the Jackson People’s Assembly see: https://jxnpeoplesassembly.org/