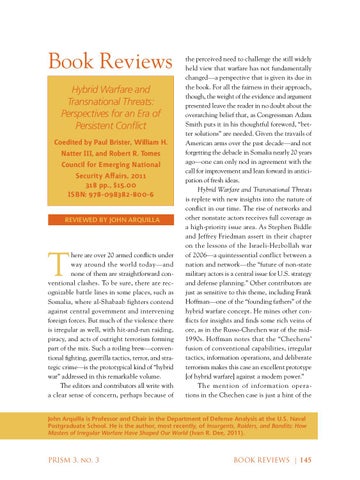 here are over 20 armed conflicts under way around the world today—and none of them are straightforward conventional clashes. To be sure, there are recognizable battle lines in some places, such as Somalia, where al-Shabaab fighters contend against central government and intervening foreign forces. But much of the violence there is irregular as well, with hit-and-run raiding, piracy, and acts of outright terrorism forming part of the mix. Such a roiling brew—conventional fighting, guerrilla tactics, terror, and strategic crime—is the prototypical kind of “hybrid war” addressed in this remarkable volume. The editors and contributors all write with a clear sense of concern, perhaps because of

the perceived need to challenge the still widely held view that warfare has not fundamentally changed—a perspective that is given its due in the book. For all the fairness in their approach, though, the weight of the evidence and argument presented leave the reader in no doubt about the overarching belief that, as Congressman Adam Smith puts it in his thoughtful foreword, “better solutions” are needed. Given the travails of American arms over the past decade—and not forgetting the debacle in Somalia nearly 20 years ago—one can only nod in agreement with the call for improvement and lean forward in anticipation of fresh ideas. Hybrid Warfare and Transnational Threats is replete with new insights into the nature of conflict in our time. The rise of networks and other nonstate actors receives full coverage as a high-priority issue area. As Stephen Biddle and Jeffrey Friedman assert in their chapter on the lessons of the Israeli-Hezbollah war of 2006—a quintessential conflict between a nation and network—the “future of non-state military actors is a central issue for U.S. strategy and defense planning.” Other contributors are just as sensitive to this theme, including Frank Hoffman—one of the “founding fathers” of the hybrid warfare concept. He mines other conflicts for insights and finds some rich veins of ore, as in the Russo-Chechen war of the mid1990s. Hoffman notes that the “Chechens’ fusion of conventional capabilities, irregular tactics, information operations, and deliberate terrorism makes this case an excellent prototype [of hybrid warfare] against a modern power.” The mention of information operations in the Chechen case is just a hint of the

John Arquilla is Professor and Chair in the Department of Defense Analysis at the U.S. Naval Postgraduate School. He is the author, most recently, of Insurgents, Raiders, and Bandits: How Masters of Irregular Warfare Have Shaped Our World (Ivan R. Dee, 2011).

comprehensive analysis of this subject that comes later in the book. For example, there are useful observations about the skillful Russian use of cyber attacks, in close coordination with conventional and irregular military operations, in the 2008 war with Georgia. In her chapter on cyber warfare, Chris Demchak goes further, making the case that cyberspace-based attacks can create “historically unprecedented advantages.” The virtual domain aside, there is also, in several chapters, close examination of the various “softer” forms of influence operations being used in most of the world’s conflicts most of the time—by all sides. For all the attention given to analyzing the nature and extent of the hybrid warfare phenomenon, there is also a significant effort to think through the responses the U.S. military ought to make as it traverses the new landscape of conflict. In her chapter, Jackie Sittel keys, among other things, on the “transformation of the services into an agile force,” a concept that has made its way into the new strategy that President Barack Obama rolled out in the Pentagon in January. James Hasik next homes in on the problems posed by our “absurdly long development cycles” and outlines a new approach based on “rapid learning and responsive development.” Daniel Magruder offers a compelling argument for pursuing military organizational redesign along networked lines—with special operations forces serving as exemplars. On this networking theme, Steven Miska rounds out the book’s prescriptive agenda by making the forceful case for including in the mix many key nodes from the nonmilitary departments of government. There is also considerable examination of American military performance in Iraq and Afghanistan—and, to some extent, British operations in the latter case. Perhaps the most wideranging and thought-provoking contribution in this section comes from the eminent military historian Martin van Creveld. His chapter has a kind of haunting quality, placing these wars in a larger, six-decade-long context, and using them to pose the question of whether the leading states really can master the challenges posed by insurgents and terrorists. The answer, as he sees it, is still “blowing in the wind.” For Guermantes Lailari, this “wind” is at the backs of the world’s jihadists, helping to propel them along in the ways of hybrid warfare. It is against the backdrop of the wide range of topics covered in Hybrid Warfare and Transnational Threats—with its far-ranging survey of odd, irregular, and mixed conflicts—that the outlines of the future world are now being sketched. The editors and contributors have convinced me that developing an understanding of hybrid warfare and mastering the challenges it poses are the most important strategic concerns of our time. But before understanding and mastery comes acceptance of the phenomenon itself. My own experience suggests that acceptance comes slowly. It took nearly 20 years from the time David Ronfeldt and I introduced our concept of cyberwar for the Pentagon to formally declare cyberspace a “warfighting domain” in July 2011. It took 15 years from the time we first asserted that “it takes a network to fight a network” for these words to become widely repeated throughout the military and national security apparatus. In both cases, it seems that these long delays had costly but not grave consequences. The same is not true of hybrid warfare. Every day the validity of the concept is denied, and understanding and mastery are delayed, is another day that sees the spread of conflict, suffering, and the deaths of countless innocents. So let me wish the editors and contributors to this volume Godspeed—and the same to those who I hope will become a large legion of their readers. PRISM