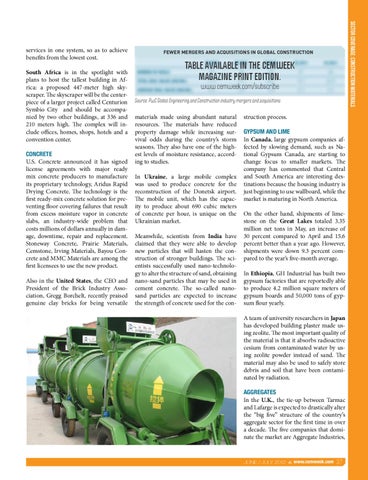 South Africa is in the spotlight with plans to host the tallest building in Africa: a proposed 447-meter high skyscraper. The skyscraper will be the centerpiece of a larger project called Centurion Symbio City and should be accompanied by two other buildings, at 336 and 210 meters high. The complex will include offices, homes, shops, hotels and a convention center. Concrete U.S. Concrete announced it has signed license agreements with major ready mix concrete producers to manufacture its proprietary technology, Aridus Rapid Drying Concrete. The technology is the first ready-mix concrete solution for preventing floor covering failures that result from excess moisture vapor in concrete slabs, an industry-wide problem that costs millions of dollars annually in damage, downtime, repair and replacement. Stoneway Concrete, Prairie Materials, Cemstone, Irving Materials, Bayou Concrete and MMC Materials are among the first licensees to use the new product. Also in the United States, the CEO and President of the Brick Industry Association, Gregg Borchelt, recently praised genuine clay bricks for being versatile

materials made using abundant natural resources. The materials have reduced property damage while increasing survival odds during the country’s storm seasons. They also have one of the highest levels of moisture resistance, according to studies. In Ukraine, a large mobile complex was used to produce concrete for the reconstruction of the Donetsk airport. The mobile unit, which has the capacity to produce about 690 cubic meters of concrete per hour, is unique on the Ukrainian market. Meanwhile, scientists from India have claimed that they were able to develop new particles that will hasten the construction of stronger buildings. The scientists successfully used nano-technology to alter the structure of sand, obtaining nano-sand particles that may be used in cement concrete. The so-called nanosand particles are expected to increase the strength of concrete used for the con-

services in one system, so as to achieve benefits from the lowest cost.

struction process. Gypsum and Lime In Canada, large gypsum companies affected by slowing demand, such as National Gypsum Canada, are starting to change focus to smaller markets. The company has commented that Central and South America are interesting destinations because the housing industry is just beginning to use wallboard, while the market is maturing in North America. On the other hand, shipments of limestone on the Great Lakes totaled 3.35 million net tons in May, an increase of 30 percent compared to April and 15.6 percent better than a year ago. However, shipments were down 9.3 percent compared to the year’s five-month average. In Ethiopia, GH Industrial has built two gypsum factories that are reportedly able to produce 4.2 million square meters of gypsum boards and 50,000 tons of gypsum flour yearly. A team of university researchers in Japan has developed building plaster made using zeolite. The most important quality of the material is that it absorbs radioactive cesium from contaminated water by using zeolite powder instead of sand. The material may also be used to safely store debris and soil that have been contaminated by radiation. Aggregates In the U.K., the tie-up between Tarmac and Lafarge is expected to drastically alter the “big five” structure of the country’s aggregate sector for the first time in over a decade. The five companies that dominate the market are Aggregate Industries,

The CW Group announces the release of Issue 9 of CemWeek Magazine. This issue’s feature article, “The Expanding Chinese Influence in Africa,” discusses the local benefits and detriments of recent Chinese investment activity in African nations. “What Happened to Climate Impact” addresses the changing nature of the regulatory discussion as cement companies push forward with their own green initiatives. Research from the CW Group highlighted in Issue 9 includes a Technical Analysis of global gray cement prices, and CW Group Analyst Terry Pavlopoulos presents the business areas that will be impacted by impending climate change legislation. Regional coverage includes a snapshot of cement manufacturing in Morocco. 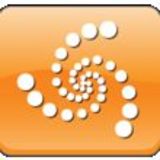