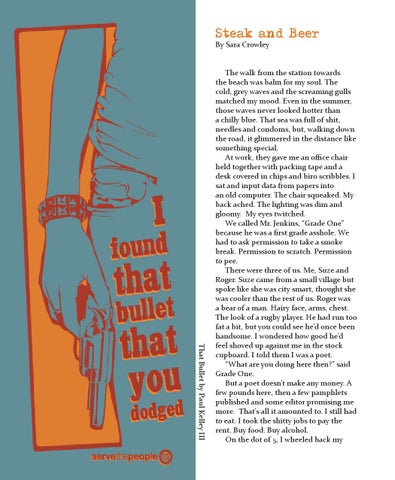 Steak and Beer By Sara Crowley

That Bullet by Paul Kelley III

The walk from the station towards the beach was balm for my soul. The cold, grey waves and the screaming gulls matched my mood. Even in the summer, those waves never looked hotter than a chilly blue. That sea was full of shit, needles and condoms, but, walking down the road, it glimmered in the distance like something special. At work, they gave me an office chair held together with packing tape and a desk covered in chips and biro scribbles. I sat and input data from papers into an old computer. The chair squeaked. My back ached. The lighting was dim and gloomy. My eyes twitched. We called Mr. Jenkins, “Grade One” because he was a first grade asshole. We had to ask permission to take a smoke break. Permission to scratch. Permission to pee. There were three of us. Me, Suze and Roger. Suze came from a small village but spoke like she was city smart, thought she was cooler than the rest of us. Roger was a bear of a man. Hairy face, arms, chest. The look of a rugby player. He had run too fat a bit, but you could see he’d once been handsome. I wondered how good he’d feel shoved up against me in the stock cupboard. I told them I was a poet. “What are you doing here then?” said Grade One. But a poet doesn’t make any money. A few pounds here, then a few pamphlets published and some editor promising me more. That’s all it amounted to. I still had to eat. I took the shitty jobs to pay the rent. Buy food. Buy alcohol. On the dot of 5, I wheeled back my 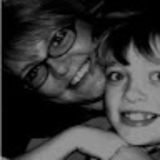