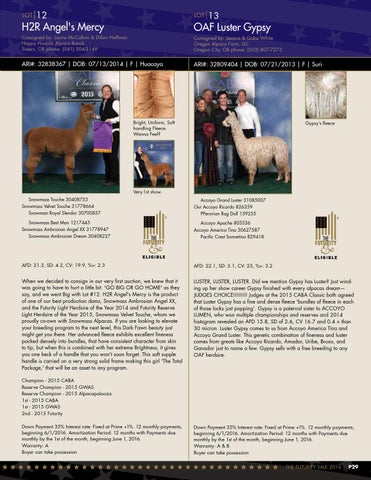 When we decided to consign in our very first auction, we knew that it was going to have to hurt a little bit. 'GO BIG OR GO HOME' as they say, and we went Big with Lot #12. H2R Angel's Mercy is the product of one of our best production dams, Snowmass Ambrosian Angel XX, and the Futurity Light Herdsire of the Year 2014 and Futurity Reserve Light Herdsire of the Year 2015, Snowmass Velvet Touche, whom we proudly co-own with Snowmass Alpacas. If you are looking to elevate your breeding program to the next level, this Dark Fawn beauty just might get you there. Her advanced fleece exhibits excellent fineness packed densely into bundles, that have consistent character from skin to tip, but when this is combined with her extreme Brightness, it gives you one heck of a handle that you won't soon forget. This soft supple handle is carried on a very strong solid frame making this girl 'The Total Package,' that will be an asset to any program.

LUSTER, LUSTER, LUSTER. Did we mention Gypsy has Luster? Just winding up her show career Gypsy finished with every alpacas dream— JUDGES CHOICE!!!!!!!! Judges at the 2015 CABA Classic both agreed that Luster Gypsy has a fine and dense fleece 'bundles of fleece in each of those locks just popping'. Gypsy is a paternal sister to ACCOYO LUMEN, who won multiple championships and reserves and 2014 histogram revealed an AFD 15.8, SD of 2.6, CV 16.7 and 0.4 > than 30 micron. Luster Gypsy comes to us from Accoyo America Tina and Accoyo Grand Luster. This genetic combination of fineness and luster comes from greats like Accoyo Ricardo, Amador, Uribe, Bruxo, and Ganador just to name a few. Gypsy sells with a free breeding to any OAF herdsire.