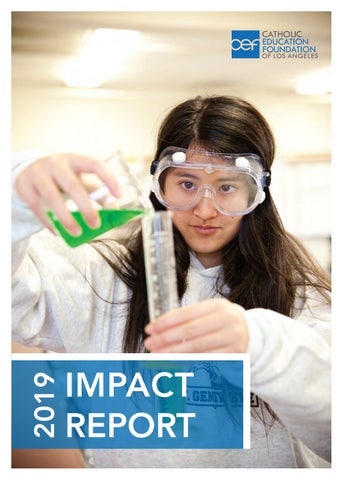 My dear brothers and sisters in Christ,

or more than 30 years now, the Catholic Education Foundation has been changing lives and bringing hope to young people and their families in some of the most disadvantaged communities here in the Archdiocese of Los Angeles. To me, CEF is something special, one of those rare organizations that makes our communities stronger and more compassionate, filled with the promise of new opportunities and the spirit of new hope. CEF is a unique partnership, bringing together Catholics and other generous benefactors committed to improving the lives of those less fortunate.

Last year CEF provided tuition assistance to more than 10,000 students. But there are thousands more families waiting to send their children to Catholic schools, if they could just afford the tuition. My dream is to make a Catholic education possible for every child. With your help, this dream is in reach. We have ambitious goals for the coming year — we would like to help even more students. And I know we can do it. So, I hope you will join me in this great effort to bring this precious gift of Catholic education to more and more of our young people. I ask your prayers for my ministry, and I entrust all of you to the loving care of the Blessed Virgin Mary, our Mother. May God grant you peace and joy,

am pleased to present the Catholic Education Foundation (CEF) Impact Report for the 2018 – 2019 school year. As a result of your generous support, CEF was able to fund more than 10,000 underserved students with tuition assistance grants totaling more than $12 million, which gave these students the opportunity to receive a Catholic education in the Archdiocese’s elementary or high schools. As we visit these schools and talk with these students, their families, their principals and teachers, we are moved by their expressions of gratitude for those donors and supporters who help to make their education possible, and their excitement and sense of hope regarding their future. It is because of you and your outpouring of support that they can hold these dreams and aspirations that go far beyond what they ever thought could be possible. On behalf of the Board of Trustees, I thank you for your commitment to making a difference in so many lives. With deepest gratitude,

of CEF students graduate from high school and meet the admission requirements to succeed in a four-year university.

When Yoshua entered kindergarten, he had been diagnosed with a speech delay and showed little interest in reading. A year later, he was reading above grade level and speaking fluently. His mother credits this transformation to his teachers who embraced his whole family by providing him with individual support and giving her the tools to help her son succeed. She says proudly, “once I brought him here, they just took him to another level.”

The youngest of four children raised by a single mom, Jamileth aspires to be a teacher when she grows up. She looks up to her older sisters who are now studying at local universities and her brother who is attending a nearby Catholic high school. The strong academic foundation and emotional support offered by Catholic schools allows Jamileth and her siblings to reach their full potential.

“Going to a Catholic school has helped my siblings stay away from dangers in my community. Where I live, there are a lot of drugs and gang violence on the street. I know my siblings are in a safe place at school and are protected from that. CEF helped us by creating a pathway and an opportunity to succeed and maybe even change the community.”

The Tran Family We wanted to send our children to a good school, however, we don’t have the financial means to pay full tuition. We thank God daily, we thank Sacred Heart High School, and we thank the CEF supporters who have made our family’s dreams come true. It’s wonderful to have CEF to support the families in need, and help children, like mine, who are eager to learn. -Duong Tran, CEF Parent

Diana is the youngest child of parents who immigrated to America not long after the Vietnam war. Due to injuries sustained in the war, her father is disabled. Her mother, who works at a local nail salon, is the family’s sole breadwinner. Thanks to tuition awards from CEF and financial aid from their schools, Diana and her sister Linda have blossomed through-

Father Matt describes the Tuition estled beside Nickerson GardAwards Program as a “safety valve” ens, the largest housing project for parents. Although the tuition cost west of the Mississippi, St. is among the lowest of Archdiocesan Lawrence of Brindisi School is an oasis schools, it is still out of reach for for its students amid a chaotic and almost 90% of the school’s families. often dangerous neighborhood. Even Financial assistance from CEF is necin the classrooms, or out in the schoolessary to reach yard, it is not They come with a spirit of these students who uncommon to hear joy, but, at the same time, desperately need helicopters circling they carry with them the the safe, nurturing overhead and, trauma of a community. We environment that occasionally, the have a chance, by way of St. Lawrence prosound of rapid faith, to address some of those vides. gunfire in the issues…and opportunities to distance. help them recognize their goodThe most importness and ability to achieve. Mrs. Alicia Camaant thing that a cho, principal, and Catholic education Father Matt Father Matt Elshoff, offers, according to OFM Cap, pastor, agree that St. LawFather Matt, is hope: “In a place like rence is unique because they infuse Watts, there isn’t always a sense of the tenets of the Catholic faith into hope. There isn’t a sense of vision. every part of the education process. But the Catholic Education Foundation helps give them a vision of hope, Catholic education offers the tools for and, as a result of that, their world processing trauma. Father Matt says starts to be changed and the worlds that this “is critical in an environment of their parents as well.” where children are at great risk.” N

Tom credits his father for inspiring a legacy of giving. “I grew up in a family where my dad was very philanthropic. I try to be as philanthropic as I can, given the resources that I have. I’m just happy to be in a position to be able to do it.” Both Tom and Celeste are products of Catholic education. Celeste recalls an experience briefly attending a public school in a rough area of Los Angeles, before pleading with her mother to send her to Catholic school. She remembers walking into her new school on the first day and being greeted by the school principal: “I just felt like I was home. I know it sounds weird, but it made such a difference going to a Catholic school.” Tom and Celeste’s own children went to Catholic schools and they remain committed to ensuring that less fortunate families can have the same opportunity. The value of Catholic schools, says Celeste, “aside from great education, is the compassion they instill in all their students.” Tom is always struck by the joy he sees in the students when he visits Dolores Mission School in Boyle Heights, where he serves on a fundraising committee. Just knowing that these students get to go to a school every day where they are safe and well cared for is the greatest reward they could receive for their generosity.

Your Dollars At Work

*General operations including fundraising expenses are funded by our endowment.

We apologize for any errors, mispellings, and/or omissions.

I just want to be an inspiration to other immigrant kids and other kids from lowincome families that don&#39;t think they have the opportunity to do something great. And I believe everyone can do something great, thanks to CEF and to schools like Salesian High School.

When her family faced financial hardship last year, they thought they would have to remove Belen from Catholic school. Thanks to CEF’s Tuition Awards Program, Belen was able to return for first grade. Belen has flourished at Nativity School. She is reading above grade-level and speaking fluently in both Spanish and English. When she grows up, she wants to be a firstgrade teacher–because it’s her favorite grade so far.

Gifts of Stock Gifts of stock to CEF provide a significant tax benefit because they eliminate capital gains taxes. The Archdiocese of Los Angeles will sell your gift of stock, and the value of your gift will be determined on the day of transfer.

Matching Gifts Many companies have matching gift programs, enhancing employee’s charitable contributions. Please contact your company’s human rescources department for the paperwork to attach to your pledge card. Your company’s contribution will be recognized as a special gift.