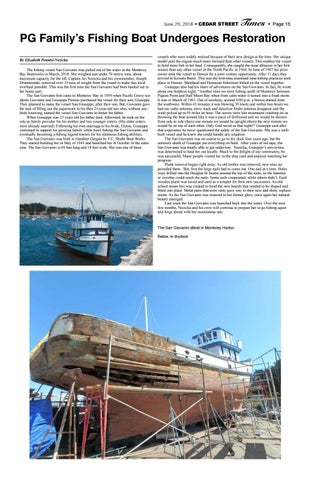 PG Family’s Fishing Boat Undergoes Restoration By Elizabeth Pennisi-Nozicka The fishing vessel San Giovanni was pulled out of the water at the Monterey Bay Boatworks in March, 2018. She weighed just under 74 metric tons, about maximum capacity for the lift. Captain Jiri Nozicka and his crewmember, Joseph Drummondo, removed over 35 tons of weight from the vessel to make this local overhaul possible. This was the first time the San Giovanni had been hauled out in her home port. The San Giovanni first came to Monterey Bay in 1959 when Pacific Grove residents Giovanni and Giuseppa Pennisi purchased the vessel for their son, Giuseppe. They planned to name the vessel San Giuseppe, after their son. But, Giovanni gave the task of filling out the paperwork to his then 21-year-old son who, without anybody knowing, named the vessel San Giovanni to honor his father. When Giuseppe was 23 years old his father died. Afterward, he took on the role as family provider for his mother and two younger sisters. (His older sisters were already married). Following his own marriage to his bride, Elaine, Giuseppe continued to support his growing family while trawl fishing the San Giovanni and eventually becoming a fishing legend known for his infamous fishing abilities. The San Giovanni was built in Gardiner Oregon by F.C. Shulte Boat Works. They started building her in May of 1943 and launched her in October of the same year. The San Giovanni is 69 feet long and 18 feet wide. She was one of three

vessels who were widely noticed because of their new design at the time. Her unique model puts the engine much more forward than other vessels. This enables the vessel to hold more fish in her haul. Consequently, she caught the most albacore in her first season than any other vessel in the North Pacific in 1944. In June of 1947 her prior owner took the vessel to Hawaii for a joint venture opportunity. After 11 days they arrived in Kewalo Basin. This was the first-time mainland tuna fishing practices took place in Hawaii. Mainland and Hawaiian fishermen fished on the vessel together. Giuseppe also had his share of adventures on the San Giovanni. In fact, he wrote about one helpless night, “Another time we were fishing north of Monterey between Pigeon Point and Half Moon Bay when from calm water it turned into a freak storm. It was in March of 1961. Out of nowhere, around 4:00 p.m. a breeze started from the southwest. Within 45 minutes it was blowing 50 knots and within two hours we had our radio antenna, stove stack and direction finder antenna disappear and the wind picked up to 95 miles an hour. The waves were like mountains crashing on us throwing the boat around like it was a piece of driftwood and we would be thrown from side to side (then) one minute we would be upright (then) the next minute we would be on top of each other. Only God saved us that night!” Giuseppe said after that experience he never questioned the safety of the San Giovanni. She was a wellbuilt vessel and he knew she could handle any situation. The San Giovanni was on course to go to dry dock four years ago, but the untimely death of Giuseppe put everything on hold. After years of red tape, the San Giovanni was finally able to get underway. Nozicka, Giuseppe’s son-in-law, was determined to haul her out locally. Much to the delight of our community, he was successful. Many people visited her in the ship yard and enjoyed watching her progress. Plank removal began right away. As old timber was removed, new ones superseded them. But, first the large nails had to come out. One nail at a time. Holes were drilled into the Douglas fir beams around the top of the nails, so the hammer or crowbar could reach the nails. Some nails cooperated, while others didn’t. Each wooden plank was saved and used as a templet for their new successors. An old school steam box was created to bend the new boards that needed to be shaped and fitted into place. Metal parts that were rusty gave way to their new and shiny replacements. As the San Giovanni was restored to her former glory, once again her natural beauty emerged. Last week the San Giovanni was launched back into the water. Over the next few months, Nozicka and his crew will continue to prepare her to go fishing again and forge ahead with her momentous tale.

The San Giovanni afloat in Monterey Harbor Below, in drydock