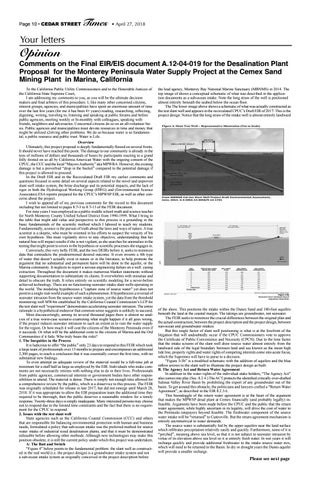 the lead agency, Monterey Bay National Marine Sanctuary (MBNMS) in 2014. The top image of shows a conceptual schematic of what was described in the application documents as a sub-ocean intake. Note the long straw of the well is positioned almost entirely beneath the seabed below the ocean floor. The The lower image above shows a schematic of what was actually constructed as the test slant well and appears in the recirculated CPUC’s Draft EIR of 2017. This is the project design. Notice that the long straw of the intake well is almost entirely landward

of the shore. This positions the intake within the Dunes Sand and 180-foot aquifers beneath the land at the coastal margin. The takings are groundwater, not seawater. The FEIR seeks to minimize the crucial differences between the original plan and the actual construction; between the project description and the project design, between sun-ocean and groundwater intakes. But this single factor of slant well positioning is what is at the forefront of the litigation that will undoubtedly occur if the CPUC Commissioners vote to approve the Certificate of Public Convenience and Necessity (CPCN). Due to the lone factor that the intake screens of the slant well draw source water almost entirely from the landward side of the legal boundary between land and sea known as the mean high tide line, property rights and water rights of competing interests come into acute focus, which the Supremes will have to parse to a decision. “Figure 3-3b” is a modified schematic with the addition of aquifers and the blue inflow arrows to the slant well to illustrate the project design as built. B. The Agency Act and Return Water Agreement In addition to the water rights of the individual stake holders, “The Agency Act” also comes into play (Sec. 8.2.4.) The ACT protects the identified critically over-drafted Salinas Valley River Basin by prohibiting the export of any groundwater out of the basin. To get around this obstacle, the politicians and lawyers crafted a “Return Water Agreement”, as described in the EIR 8.2.3.6. This boondoggle of the return water agreement is at the heart of the argument that makes the MPWSP desal plant at Cemex financially (and probably legally) infeasible. Arguments have been made before the CPUC and the public that the return water agreement, while highly uncertain in its legality, will drive the cost of water to the Peninsula ratepayers beyond feasible. The freshwater component of the source water intake will be “returned” to Castroville. But the return agreement mechanism is entirely asymmetrical to water demands. The source water is substantially fed by the upper aquifers near the land surface which infiltrates precipitation relatively easily and quickly. Furthermore, some of it is “perched”, meaning above sea level, so that it is not subject to seawater intrusion by virtue of its elevation above sea level so it is entirely fresh water. In wet years it will recharge quickly and provide additional freshwater to the intake source water mix, which will need to be returned to the Basin. In dry or drought years the Dunes aquifer will provide a smaller recharge.