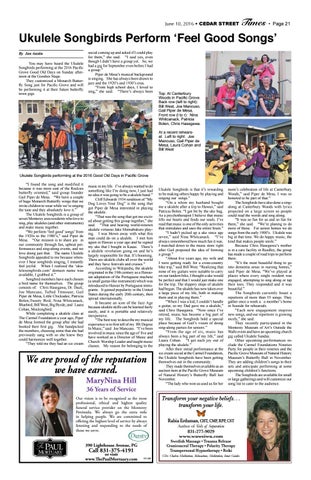 You may have heard the Ukulele Songbirds performing at the 2016 Pacific Grove Good Old Days on Sunday afternoon at the Goodies Stage. They customized a Monarch Butterfly Song just for Pacific Grove and will be performing it at their future butterfly town gigs.

social coming up and asked if I could play for them,” she said. “I said yes, even though I didn’t have a group yet.  So, we had a gig for September even before I had a group.” Piper de Mesa’s musical background is singing.  She has always been drawn to jazz and the 1920’s and 1930’s eras.   “From high school days, I loved to sing,” she said.  “There’s always been

Ukulele Songbirds performing at the 2016 Good Old Days in Pacific Grove “I found the song and modified it because it was more east of the Rockies butterfly oriented,” said group founder Gail Piper de Mesa. “We have a couple of huge Monarch Butterfly wings that we invite children to wear while we’re singing the tune and they absolutely love it.” The Ukulele Songbirds is a group of seven Monterey area residents who love to sing, play ukuleles (and other instruments) and make music together.  “We perform ‘feel good’ songs’ from the 1920s to the 1980’s,” said Piper de Mesa.  “Our mission is to share joy  in our community through fun, upbeat performances and sing-along events, and we love doing just that.  The name Ukulele Songbirds appealed to me because whenever I hear songbirds singing, I instantly feel joyful.  When I realized the ‘ukulelesongbirds.com’ domain name was available, I grabbed it.” Songbird members have each chosen a bird name for themselves.  The group consists of:  Chris Hasegawa, Dr. Duck;  Joe Mancuso, Tufted Titmouse; Gail Piper de Mesa, Little Chickadee; Patricia Bolen,Tweety Bird; Nina Whitcanack, Bluebird; Bill West, Big Byrde; and  Laura Cohan, Mockingbird. While completing a ukulele class at The Carmel Foundation a year ago, Piper de Mesa formed the group after she had booked their first gig.  She handpicked the members, choosing some that she had previously sang with so she knew they could harmonize well together.   “They told me they had an ice cream

music in my life. I’ve always wanted to do something like I’m doing now, I just had no idea it was going to be a ukulele band.” Cliff Edwards 1934 rendition of “My Dog Loves Your Dog” is the song that got Piper de Mesa interested in playing the ukulele. “That was the song that got me excited about getting this group together,” she said.  “That and hearing world-renown ukulele virtuoso Jake Shimabukuro playing.  I was blown away with what this man could do on a ukulele.  I met him again in Hawaii a year ago and he signed my uke that I bought in Kauai.  There’s a ukulele revolution going on and he’s largely responsible for that. It’s booming.  There are ukulele clubs all over the world and they have festivals and cruises.” According to Wikipedia, the ukulele originated in the 19th century as a Hawaiian adaptation of the Portuguese machete (a small guitar-like instrument) which was introduced to Hawaii by Portuguese immigrants.  It gained popularity in the United States during the early 20th century, then spread internationally. It became an icon of the Jazz Age because ukulele skills can be learned fairly easily, and it is portable and relatively inexpensive. “The best way to describe my musical experience is to first tell of my  BS Degree In Music,” said  Joe Mancuso.  “I’ve been involved in music since the age of  five and have worked as a Director of Music and Church  Worship Leader and taught music classes.  My reason for belonging to the

We are proud of the reputation we have earned. MaryNina Hill 36 Years of Service

Our vision is to be recognized as the most professional, ethical and highest quality funeral service provider on the Monterey Peninsula. We always go the extra mile in helping people. We are committed to offering the highest level of service by always listening and responding to the needs of those we serve.

mom’s celebration of life at Canterbury Woods,” said Piper de Mesa. I was so honored to be part of that.” The Songbirds have also done a singalong at Canterbury Woods with lyrics projected on a large screen so people could read the words and sing along. “It was so fun for us and so fun for them,” she said. “We’re planing to do more of those.  For senior homes we do songs from the early 1900’s.  Ukulele was big at that time. We do happy music, the kind that makes people smile.” Because Chris Hasegawa’s mother is in a care facility in Reedley, the group has made a couple of road trips to perform there.  “It’s the most beautiful thing to go into dementia areas in nursing homes,” said Piper de Mesa. “We’ve played at places where every single resident was engaged, attempting to sing along or tap their toes. They responded and it was beautiful.” The Songbirds currently boast a repertoire of more than 55 songs. They gather once a week a  a member’s home in Seaside for rehearsals. “Each new engagement inspires new songs, and our repertoire is growing nicely,” she said. They recently participated in the Monterey Museum of Art’s Outside the Walls event and have an upcoming church gig called Ukulele Sunday. Other upcoming performances include the Carmel Foundations Nineties Party for people in their nineties and the Pacific Grove Museum of Natural History Museum’s Butterfly Ball in November. They are adding children’s songs to their sets and anticipate performing at some upcoming children’s functions. The Songbirds are available for small or large gatherings and will customize our song list to cater to the audience.

Ukulele Songbirds is that it’s rewarding to be making others happy by playing and singing our songs.” “On a whim my husband bought me a ukulele after a trip to Hawaii,” said Patricia Bolen. “I got bit by the uke bug.  As a psychotherapist I believe that music lifts our hearts and feeds our souls. I’ve read that music is one of the only activities that stimulates and uses the entire brain.” “I hadn’t picked up a uke since age seven,” said Nina Whitcanack.  “I’ve always remembered how much fun it was.  I marched down to the music store right after Gail proposed the idea of forming a group.” “About five years ago, my wife and I were getting ready for a cross-country bike trip,” said Bill West. “Realizing that none of my guitars were suitable to carry on our tandem bike, I thought a uke would be perfect and that I would just make one for the trip. The slippery slope of ukulele had begun. The ukulele has now taken over a large piece of my life, both in making them and in playing them.” “When I was a kid, I couldn’t handle a guitar, so my Dad gave me a ukulele,” said Chris Hasegawa.  “Now since I’ve retired, music has become a big part of my life.  The Songbirds hold a special place because of Gail’s vision of doing sing-along parties for seniors.” “From the age of six, music has always been a big part of my life,” said Laura Cohan.  “I get such joy out of playing the ukulele.” After their initial performance at the ice cream social at the Carmel Foundation, the Ukulele Songbirds have been getting themselves out in the community.   They made themselves available as an auction item at the Pacific Grove Museum of Natural History’s Butterfly Ball last November. “The lady who won us used us for her