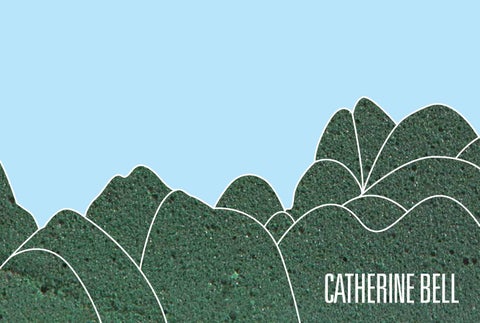 â&#x20AC;&#x153;...from her perception of the life of these remains she fashions an ephemeral sense of presence.â&#x20AC;?

What remains: landscapes of mourning In states of disintegration and decay, states that betray the presence of mortality, something is exposed in the material, opening it up for the critical gaze. Catherine Bell is an artist who inserts her work into this breach between desire and death, hope and mourning. As an artist, she asks, What remains? and from her perception of the life of these remains she fashions an ephemeral sense of presence. Motivated by her insight into mortality and mourning, and their natural accompaniment, melancholy, Bell reminds us that the spectre of death haunts our actions in this world, and, as Derrida suggests, that the body of work is a substitute for the living body, the ‘corpus for the corpse’. Mountains of Mourne (2012-14) came out of Bell’s lived experience of a place set aside for the dying. As artist-in-residence at St Vincent’s Hospital Melbourne, in 2012-13, Bell worked in the hospice, Caritas Christi, that is one branch of St Vincent’s. This hospice is an end-oflife care institution for those with incurable illnesses. Negotiating the sensitivities of the setting and its universal significance, Catherine Bell’s art addresses our fragile sense of mortality when it is confronted by death. This is symbolised in our culture by flowers, their ephemerality and delicacy an analogue for mortality. Bell extracted commemorative fragments in the form of the florist’s foam called ‘Oasis’, used to keep Catherine Bell, Mountains of Mourne (2012-14) H 14cm x W 8.5cm x D 8cm

flower arrangements fixed and hydrated. The concealed support for such flowers, gleaned from the exhausted bouquets that have fleetingly brightened the rooms of the dying, finds a second life in Bell’s carvings. She has re-purposed it to ask how the experience, inward and solitary, of absence and loss, can be imagined and communicated. In Catherine Bell’s hands, this material is asked to speak its history; its manipulation is a ritual acting-out of the artist’s anxieties, and through this manipulation it forms a memorial to the deceased. As an artist Bell takes on the task of honouring the truth that life transcends our grasp; she asks how what remains after death can be given a voice, and on whose behalf it can speak. Thus the work of Catherine Bell tells an allegory of mortality. She illustrates the ‘work of mourning’, that which Freud defines as a process of the mourner being in service to a long exercise of detachment from the beloved. An encounter with mourning, its materiality imbued with the numinous, inhabits these artefacts. The work of Catherine Bell has repeatedly dealt, in subtle and compelling ways, with death and mourning. In Snow Baby (2003) she devised a ritual in sympathy with the tragic devastation of maternal hope. A lump of snow, compacted in the shape of the gravid abdomen, then thawed, formed an allegorical counterpart for the stillborn child of a friend. In Felt is the Past Tense of Feel (2006) she acted out a cathartic private ritual honouring Catherine Bell, Caritas Christi Bouquet (a)bove and (b)elow (2012-13) Installation detail

her father, who died in 2003. Wearing a suit of protective pink felt, which in turn encased her fatherâ&#x20AC;&#x2122;s formal suit, and sucking and spitting the salty, bitter ink of squid as both erasure and camouflage, she gave witness to grief. In both works ritual was used to frame and transform a menacing encounter with mortality. Bell is audacious in the face of this mortal terror, death. The cult of mourning however can slip into pathology. Freud identified this as melancholy or depression. The mourner and melancholic both begin by denying their loss and are unwilling to recognize it. Yet mourning is resolved when the mourner recognizes the call of reality, to let go of the beloved and again give freedom to desire. Successful mourning comes about at the point where this detachment enables the mourner to live again. To determine the destiny of worldly effects is a significant part of this milestone, and one that Freud gave little attention to. This procedure and its attendant rituals is key to Bellâ&#x20AC;&#x2122;s process. The management of the worldly goods that signify the departed has a powerful part to play in the long process of the work of mourning. To the wounded psyche these material residues stand in for the lost object. The memorial cenotaph, the decorated grave and the roadside shrine all act out the materiality of mourning. Freud conceives the structure of this melancholic response as an antithesis to the basic wellbeing of the ego, the survival of which is put at risk. One can mourn many things, not only a person. The Caritas Christi hospice was founded by the nuns of The Sisters of Charity, an order whose members first came from Ireland to Australia in the nineteenth Catherine Bell, Mountains of Mourne (2012-14) H 14cm x W 8cm x D 8cm

century. They are a socially committed order whose mission is among the suffering and the disenfranchised, in accordance with their vocation of social engagement. Mourning for oneâ&#x20AC;&#x2122;s land is one of the most poignant acts of commemoration, as both the refugee and the emigrant know all too well. The form of the carvings alludes to the story of the migration and exile of the Sisters whose calling it is to care for the dying. Ireland is a land singularly inscribed with tropes of loss and longing. Caritas Christi, a place for the dying, springs from the work of nuns dying far from home, migrating from Ireland to be buried in Tasmania, where their nineteenth-century graves still exist. Bell encodes a remembered landscape in these carvings. The green material of Oasis is mimetic of the swelling, rolling green hills of Ireland, not as they are, but as they are treasured and imagined. They are objects that yearn for their model, a land far away in both time and space.

In referencing this mythologised landscape the carvings manipulate scale. In the game of scale the intimate presence of a carving stands in for the spacious presence of the land. Miniaturization condenses the world in order to suggest new readings of topography and to propose how it expresses states of interiority. Viewed from the masterly position of the spectator, the carvings become an emblematic stage for the presence of secret life and secret histories. The vision also delves beneath the surface to imagine the earth as rooted in place, the carvings anchored to the depth of geological time through their wedge-shaped bases. Like archaeological relics they are protected and entombed in their vitrines. Some are assembled to make a panorama over which the eye can meander through a space of reverie.

Embedded in these objects is an idea of sacred geography whose numinous values inhere in spaces marked by patterns of human movement. These values stir humans to pilgrimage, a journey out of everyday space towards the space of spiritual insight, identified with experiences of penance or transcendence. The Irish have encoded these paths and patterns in their land over millennia, where pagan sacred places were incised into the landscape as burial mounds, standing stones or local shrines. Many of the Irish pre-Christian female divinities are associated with the land; some were originally territorial goddesses whose names are encrypted in the landscape and their metaphorically feminine aspect. These were subsumed by Christian hegemony from the fifth century. The first Sisters of Charity inherited this richly inscribed sacred geography. To re-imagine their land gives the nuns a ceremonial repatriation in the sculptures. The carvings not only connect to dying individuals but also to the idea of dying in a foreign place, as each inpatient at Caritas Christi is perforce dying in a foreign place, if not physically, then psychically very far from home. In responding to this complex history of migration, the carvings recall the contours of Ireland, always greener in the imagination, and anticipate the mysteries of the country from whose bourn no traveller returns. Bellâ&#x20AC;&#x2122;s stylized landscape recalls the miniaturized island that is the site of the final scene of Solaris (dir. Andrei Tarkovsky, 1972) to which the astronaut-explorer has returned. The viewer is shown that this island is floating on the sea of memories, and the traveller is trapped forever in the desire for home. Catherine Bell, Mountains of Mourne (2012-14) H 9cm x W 9.5cm x D 7.5cm

The most poignant of material remains is, of course, the body itself. A corpse expresses its radical otherness to the living body; it is a ponderous physical presence that, in its absence of vitality, is psychically baffling. It must be disposed of according to custom and culture, but whether to align it to the element of fire, by cremation, or of earth, with burial, is a culturally weighty decision. Bell aligns mourning with both elements: earth in the Mountains of Mourne and fire in the Crematorium Vessels. These miniature urns, also carved from Oasis, fragile as an archaeological relic, are poised to receive the ashes of the deceased. As miniaturised vases they continue to play the game of scale. They replace the interior space of the hospital flower vase with a newly-created exteriority, so that, in an infinite regress, we can imagine them containing yet another block of Oasis, that could be used in the manufacture of yet more miniature vessels and landscapes. A hollow vessel can also contain other materials, condensed and powerful in both physical and psychological senses: flowers, of course, but also the oil of extreme unction, or embalming fluid, or even the floating dust that is the detritus of every body, that same dust that binds together the living and the dead with every breath of air. The use of Oasis as a sculptural medium is not its end; it has further stories to tell. The carvings are accompanied by series of prints Caritas Christi Bouquet (a)bove and (b)elow (2012-13). Bell used Oasis as a printing matrix, inking the top

surface and pressing it to paper to make a print; each of these is paired with a second print from the bottom surface. Their pairings reiterate the idea of repetition and ritual that ties this body of work together. Suspended and defenceless, each print appears as if crucified, framing in pairs the iconic mountain from whose materiality presence the print has sprung. Each print resembles a slab of weathered stone such as a grave marker or abraded runic inscription. These symbolic markers of the place where the mortal body rests link landscape and body for eternity. The prints evoke the various representations of disease that make up an image economy of the hospital: the scans, x-rays, and pathology slides that pronounce with finality on our mortality. Each print records the random trauma to which the reclaimed substrate is a memorial: like the body, its lacerations and scars give a forensic account of its injuries. Thus Catherine Bell teases utterance from disregarded materials, and enables them to give voice to the departed and to the act of bearing witness. Caroline DurrĂŠ June 2014 Dr Caroline DurrĂŠ is a lecturer in the Faculty of Art Design and Architecture, Monash University

â&#x20AC;&#x153;Bell encodes a remembered landscape in these carvings... they become an emblematic stage for the presence of secret life and secret histories.â&#x20AC;?

Dr Catherine Bell is a Senior Lecturer in the Faculty of Education and Arts at the Australian Catholic University (VIC), National Course Director of the Bachelor of Visual Arts and Design degree and ACU Gallery Director. Her research in art and health complements her art practice that forefronts art on the margins, art activism, community engagement and feminist perspectives.