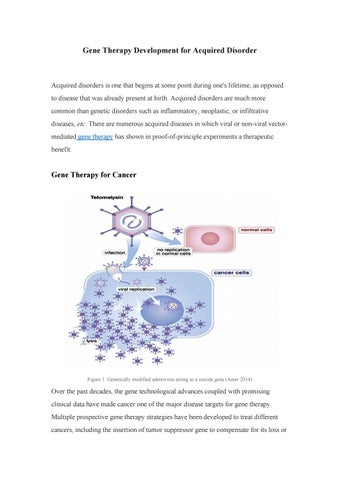 Acquired disorders is one that begins at some point during one's lifetime, as opposed to disease that was already present at birth. Acquired disorders are much more common than genetic disorders such as inflammatory, neoplastic, or infiltrative diseases, etc. There are numerous acquired diseases in which viral or non-viral vectormediated gene therapy has shown in proof-of-principle experiments a therapeutic benefit.

Over the past decades, the gene technological advances coupled with promising clinical data have made cancer one of the major disease targets for gene therapy. Multiple prospective gene therapy strategies have been developed to treat different cancers, including the insertion of tumor suppressor gene to compensate for its loss or

Cardiovascular diseases remain a large health problem in the world. Currently, the pharmacologic drugs and device therapies have multiple limitations, but the development of gene knowledge and delivery systems has given researchers an opportunity to use gene therapy strategies to treat cardiovascular diseases. Early studies suggest that the transfer of myocardial gene could produce vascular endothelial growth factor (VEGF) or fibroblast growth factor (FGF) to improve angiogenesis. In addition, myocardial gene transfer also reduces arrhythmia vulnerability and increases myocardial contractility. There exist several delivery vectors for use in the clinic, including viral and non-viral based vectors.

Gene Therapy for Neurological Disease Diseases of the nervous system are often caused by inherited genetic mutations or genetic changes induced by disease-related events. Standard medical and surgical practice is not effective to cure these diseases and gene therapy as a powerful approach shows huge potential to treat some of the most common neurological diseases. The most common central nervous system (CNS) gene therapy vectors, AAV, HSV and adenoviral vectors have been used to deliver therapeutic genes directly into the CNS with better safety. With years of experience, Creative Biolabs can provide the development service covering the full process, including the disease mechanisms research, gene therapy targets, therapeutic gene selection, gene vector design, and methods of delivery, particularly the preclinical validation. 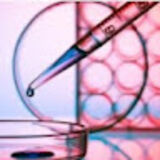 Acquired disorders is one that begins at some point during one's lifetime, as opposed to disease that was already present at birth. There a...

Acquired disorders is one that begins at some point during one's lifetime, as opposed to disease that was already present at birth. There a...