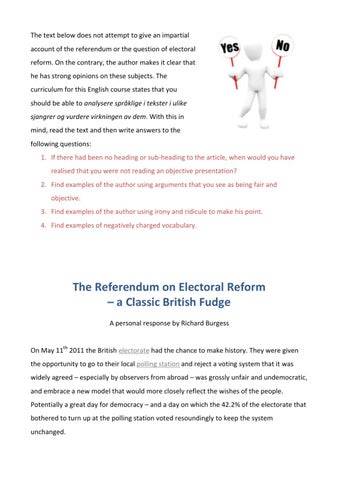 The text below does not attempt to give an impartial account of the referendum or the question of electoral reform. On the contrary, the author makes it clear that he has strong opinions on these subjects. The curriculum for this English course states that you should be able to analysere språklige i tekster i ulike sjangrer og vurdere virkningen av dem. With this in mind, read the text and then write answers to the following questions: 1. If there had been no heading or sub-heading to the article, when would you have realised that you were not reading an objective presentation? 2. Find examples of the author using arguments that you see as being fair and objective. 3. Find examples of the author using irony and ridicule to make his point. 4. Find examples of negatively charged vocabulary.

The Referendum on Electoral Reform – a Classic British Fudge A personal response by Richard Burgess On May 11th 2011 the British electorate had the chance to make history. They were given the opportunity to go to their local polling station and reject a voting system that it was widely agreed – especially by observers from abroad – was grossly unfair and undemocratic, and embrace a new model that would more closely reflect the wishes of the people. Potentially a great day for democracy – and a day on which the 42.2% of the electorate that bothered to turn up at the polling station voted resoundingly to keep the system unchanged.

Personally, I’ve always felt that the reputation of the British as traditionalist and sceptical of change was a little too simple. After all, wasn’t it in Britain that the Industrial Revolution started? And the antislavery movement? And mini-skirts? Surely we weren’t the bunch of hidebound stick-in-the-muds that we were always being portrayed as? But as the results of the referendum on electoral reform started coming through on the May 12 th, I began to have my doubts. As it turned out, voters in favour of keeping the so-called first-past-the-post system outnumbered those in favour of change by two to one. In only 10 of 440 polling districts was there a Yes majority. A land-slide victory for the stick-in-the-muds.

As someone who has spent several years of his life explaining the wacky British electoral system, and who has seen students’ eyebrows raised in disbelief at the sheer daftness of a system that in theory allows a party to win 49% of the popular vote and gain 0 seats in Parliament, I was hoping that the referendum would provide some proof that it was the system that was mad, not the people governed by it. After all, the people have never been given the opportunity to change the electoral system, I told students, because the two major parties have too much to lose by introducing a fairer one. If they were given the opportunity, it would change British politics forever, I said confidently.

Well, now they have been given that opportunity, and the response was … a loud raspberry. In the event, it came as no surprise. In the run-up to the referendum, the No campaign had the upper hand all the way, dominating the popular press with half-truths and downright lies about the awful consequences of tinkering with system. The Yes campaign was hampered by the fact that it was closely associated with the Liberal Democrats, whose popularity has fallen drastically since they joined the government in coalition with the Conservatives. Holding the referendum on the same day as local elections and elections to

the three devolved assemblies in Wales, Scotland and Northern Ireland, which Nick Clegg, the LibDem leader had insisted on, turned out to be a bad idea for the Yes campaign. It took focus away from the constitutional questions and turned it into a party-political debate. For Labour voters, who generally have been fairly positive to the idea of electoral change, the referendum was an opportunity to punish the LibDems for their treachery in joining the howling chorus of Conservatives who blamed Labour for all Britain’s current economic problems.

The referendum came about as part of the post-election negotiations between the Conservatives and the LibDems. You will remember that the election ended with a “hung Parliament”, i.e. a Parliament where no party has a majority. (See: ACCESS UPDATE: Coalition, Electoral Reform and Devolution) The LibDems have always been in favour of electoral reform – they have much to gain from it. The Conservatives have always been against it – they have much to lose from it. If they were to form a government together, a compromise had to be reached.

The compromise was a classic British fudge: the Conservatives would agree to a referendum on a new electoral system, but not the one that the LibDems wanted, namely Proportional Representation (PR), the system we have in Norway. No, PR was too drastic and would cause utter chaos (look around you as read this and see the utter chaos closing in on you…). Instead they would agree to a referendum on a system called the Alternative Vote (AV). Not that they were in favour of it – far from it. But they found it slightly less awful than PR. The LibDems, on the other hand, didn’t want AV. Nick Clegg referred to it just before the election as “a miserable little compromise”. But it was the best offer he was going to get from David Cameron, the Conservative leader. So that was the agreement: a referendum would be held on a voting system that neither of them wanted.

The campaign was a rancorous affair, pitching coalition partners against each other and stretching the rules of serious debate beyond the limit. The No campaigners were more preoccupied with painting nightmare scenarios of the consequences of AV than with explaining the advantages of the present system (one of the “advantages” being that it will

keep the Conservative Party and The Labour Party alternately in power until the end of time). AV would “damage democracy”, Cameron said. “AV will mean the votes of some people get counted more than others”, he claimed, ignoring the fact that in the 2010 election over 70% of the votes were “wasted”, in other words they went to losing candidates and thus did not achieve any representation. AV would cause hung parliaments – although the last election had demonstrated that the FPTP system was quite capable of doing so too. And anyway, hung parliaments just meant coalition government, which Mr Cameron claimed to be making a good job of. “AV would be gift a gift to the BNP,” announced the Daily Mail, in spite of the evidence that the opposite was the case. (The BNP actively opposed AV because, as the party’s deputy chairman put it, “We are never going to get our feet under the table under the AV system”.)

What are the consequences of the result? Well, for one thing, by first agreeing to substitute PR with AV and then seeing that defeated in a referendum, the Liberal Democrats have effectively sidelined their most defining political issue and their strongest electoral card for the foreseeable future. They have tied their fortunes to a government that is currently involved in some of the deepest cuts in public spending ever made and have at the same time failed to change an electoral system that threatens to wipe them if they fall out of favour with the electorate. I wouldn’t want to be leader of the Liberal Democrats at the next election.

In a broader perspective, the referendum result means business as usual. Or does it? In the election to the Scottish Parliament held on the same day – and conducted, incidentally, on a sort of AV system – the Scottish National Party (SNP) won an impressive victory, gaining an absolute majority, ahead of the Labour Party. Nothing, it seems, is impossible for Alex Salmond, the SNP’s charismatic leader. Perhaps not even full independence? And where would that leave Parliament in Westminster? Labour would lose its 41

Scottish MPs, whereas the Conservatives would lose only one.

With FPTP firmly in place, the LibDems seem destined to walk in the shadows forever. “There’ll be blue birds over/the White Cliffs of Dover/Tomorrow, just you wait and see!” sang Vera Lynn in an old wartime song. Prophetic words. I fear they may be very blue indeed.

FACT BOX: The First-Past-the-Post System (FPTP) This is the current system of voting used in General Elections in the UK. The electorate is divided geographically into electoral districts called constituencies (currently 650 in the UK) with roughly equal population in each. In an election, candidates compete to be the constituency’s sole representative in Parliament. The candidate with the most votes wins. This candidate may have polled considerably less half of the votes cast.

Proportional Representation (PR) In PR the aim is to match the proportion of seats won by a political party with the proportion of votes cast for that party. This can be done by treating the whole electorate as one electoral district. However, usually PR involves dividing the country into electoral districts where there are several members representing each district.

The Alternative Vote (AV) AV seeks to preserve the idea of one winner for each constituency. But instead of just ticking off one candidate, voters tick off several, in order of preference. If one candidate polls more than 50% on the basis of first preferences, that candidate wins outright. If not, then the candidate in last place is eliminated and their votes are reallocated according to their second preference. This process continues until a candidate has an absolute majority of the votes.

British National Party (BNP) The BNP is a far-right party that opposes immigration and wishes to repatriate immigrants and their descendants. It is often accused of inciting racist violence. While the party has no MPs in Westminster, it is represented in a number of local councils, in the London Assembly and in the European Parliament. 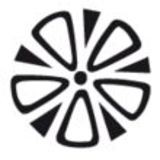 The Referendum on Electoral Reform

The Referendum on Electoral Reform