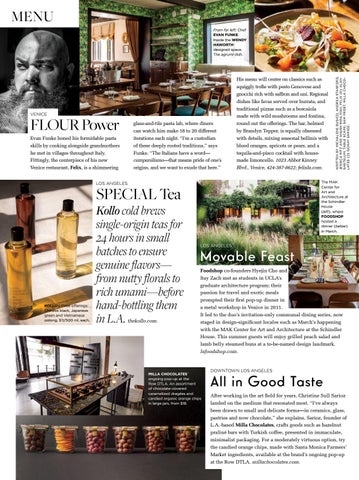 FLOUR Power Evan Funke honed his formidable pasta skills by cooking alongside grandmothers he met in villages throughout Italy. Fittingly, the centerpiece of his new Venice restaurant, Felix, is a shimmering

glass-and-tile pasta lab, where diners can watch him make 18 to 20 different iterations each night. “I’m a custodian of these deeply rooted traditions,” says Funke. “The Italians have a word— campanilismo—that means pride of one’s origins, and we want to exude that here.”

His menu will center on classics such as squiggly trofie with pesto Genovese and gnocchi rich with saffron and uni. Regional dishes like favas served over burrata, and traditional pizzas such as a boscaiola made with wild mushrooms and fontina, round out the offerings. The bar, helmed by Brandyn Tepper, is equally obsessed with details, mixing seasonal bellinis with blood oranges, apricots or pears, and a tequila-and-pisco cocktail with housemade limoncello. 1023 Abbot Kinney Blvd., Venice, 424-387-8622; felixla.com.

The MAK Center for Art and Architecture at the Schindler House (left), where FOODSHOP hosted a dinner (below) in March.

Foodshop co-founders Hyejin Cho and Itay Zach met as students in UCLA’s graduate architecture program; their passion for travel and exotic meals prompted their first pop-up dinner in a metal workshop in Venice in 2011. It led to the duo’s invitation-only communal dining series, now staged in design-significant locales such as March’s happening with the MAK Center for Art and Architecture at the Schindler House. This summer guests will enjoy grilled peach salad and lamb belly steamed buns at a to-be-named design landmark. lafoodshop.com.

MILLA CHOCOLATES’ ongoing pop-up at the Row DTLA. An assortment of chocolate-covered caramelized dragées and candied organic orange chips in large jars, from $18.

All in Good Taste After working in the art field for years, Christine Sull Sarioz landed on the medium that resonated most. “I’ve always been drawn to small and delicate forms—in ceramics, glass, pastries and now chocolate,” she explains. Sarioz, founder of L.A.-based Milla Chocolates, crafts goods such as hazelnut praliné bars with Turkish coffee, presented in immaculate, minimalist packaging. For a moderately virtuous option, try the candied orange chips, made with Santa Monica Farmers’ Market ingredients, available at the brand’s ongoing pop-up at the Row DTLA. millachocolates.com.