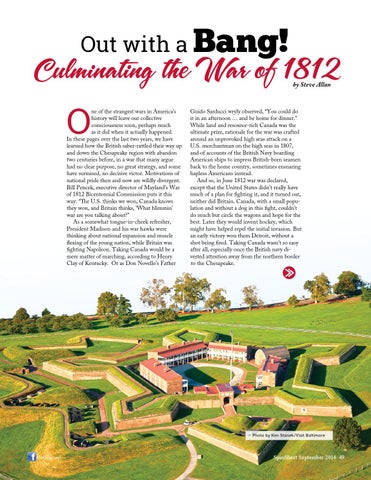 Out with a Bang!

Culminating the War of 1812 by Steve Allan

ne of the strangest wars in America’s history will leave our collective consciousness soon, perhaps much as it did when it actually happened. In these pages over the last two years, we have learned how the British saber-rattled their way up and down the Chesapeake region with abandon two centuries before, in a war that many argue had no clear purpose, no great strategy, and some have surmised, no decisive victor. Motivations of national pride then and now are wildly divergent. Bill Pencek, executive director of Mayland’s War of 1812 Bicentennial Commission puts it this way: “The U.S. thinks we won, Canada knows they won, and Britain thinks, ‘What blimmin’ war are you talking about?” As a somewhat tongue-in-cheek refresher, President Madison and his war hawks were thinking about national expansion and muscle flexing of the young nation, while Britain was fighting Napoleon. Taking Canada would be a mere matter of marching, according to Henry Clay of Kentucky. Or as Don Novello’s Father

Guido Sarducci wryly observed, “You could do it in an afternoon … and be home for dinner.” While land and resource-rich Canada was the ultimate prize, rationale for the war was crafted around an unprovoked high seas attack on a U.S. merchantman on the high seas in 1807, and of accounts of the British Navy boarding American ships to impress British-born seamen back to the home country, sometimes ensnaring hapless Americans instead. And so, in June 1812 war was declared, except that the United States didn’t really have much of a plan for fighting it, and it turned out, neither did Britain. Canada, with a small population and without a dog in this fight, couldn’t do much but circle the wagons and hope for the best. Later they would invent hockey, which might have helped repel the initial invasion. But an early victory won them Detroit, without a shot being fired. Taking Canada wasn’t so easy after all, especially once the British navy diverted attention away from the northern border to the Chesapeake. 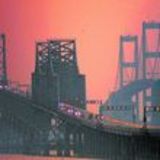