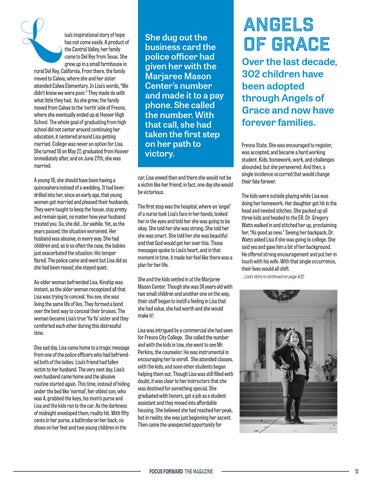 isa’s inspirational story of hope has not come easily. A product of the Central Valley, her family came to Del Rey from Texas. She grew up in a small farmhouse in rural Del Rey, California. From there, the family moved to Calwa, where she and her sister attended Calwa Elementary. In Lisa’s words, “We didn’t know we were poor.” They made do with what little they had. As she grew, the family moved from Calwa to the ‘north’ side of Fresno, where she eventually ended up at Hoover High School. The whole goal of graduating from high school did not center around continuing her education, it centered around Lisa getting married. College was never an option for Lisa. She turned 18 on May 27, graduated from Hoover immediately after, and on June 27th, she was married.

She dug out the business card the police officer had given her with the Marjaree Mason Center’s number and made it to a pay phone. She called the number. With that call, she had taken the first step on her path to victory.

A young 18, she should have been having a quinceañera instead of a wedding. It had been drilled into her, since an early age, that young women got married and pleased their husbands. They were taught to keep the house, stay pretty and remain quiet, no matter how your husband treated you. So, she did…for awhile. Yet, as the years passed, the situation worsened. Her husband was abusive, in every way. She had children and, as is so often the case, the babies just exacerbated the situation. His temper flared. The police came and went but Lisa did as she had been raised; she stayed quiet.

car, Lisa vowed then and there she would not be a victim like her friend; in fact, one day she would be victorious.

An older woman befriended Lisa. Kinship was instant, as the older woman recognized all that Lisa was trying to conceal. You see, she was living the same life of lies. They formed a bond over the best way to conceal their bruises. The woman became Lisa’s true ‘Ya-Ya’ sister and they comforted each other during this distressful time.

She and the kids settled in at the Marjaree Mason Center. Though she was 24 years old with two small children and another one on the way, their staff began to instill a feeling in Lisa that she had value, she had worth and she would make it!

One sad day, Lisa came home to a tragic message from one of the police officers who had befriended both of the ladies. Lisa’s friend had fallen victim to her husband. The very next day, Lisa’s own husband came home and the abusive routine started again. This time, instead of hiding under the bed like ‘normal’, her oldest son, who was 4, grabbed the keys, his mom’s purse and Lisa and the kids ran to the car. As the darkness of midnight enveloped them, reality hit. With fifty cents in her purse, a bathrobe on her back, no shoes on her feet and two young children in the

Over the last decade, 302 children have been adopted through Angels of Grace and now have forever families. Fresno State. She was encouraged to register, was accepted, and became a hard working student. Kids, homework, work, and challenges abounded, but she persevered. And then, a single incidence occurred that would change their fate forever. The kids were outside playing while Lisa was doing her homework. Her daughter got hit in the head and needed stitches. She packed up all three kids and headed to the ER. Dr. Gregory Watts walked in and stitched her up, proclaiming her, “As good as new.” Seeing her backpack, Dr. Watts asked Lisa if she was going to college. She said yes and gave him a bit of her background. He offered strong encouragement and put her in touch with his wife. With that single occurrence, their lives would all shift. ...Lisa’s story is continued on page #32

Lisa was intrigued by a commercial she had seen for Fresno City College. She called the number and with the kids in tow, she went to see Mr. Perkins, the counselor. He was instrumental in encouraging her to enroll. She attended classes, with the kids, and soon other students began helping them out. Though Lisa was still filled with doubt, it was clear to her instructors that she was destined for something special. She graduated with honors, got a job as a student assistant and they moved into affordable housing. She believed she had reached her peak, but in reality, she was just beginning her ascent. Then came the unexpected opportunity for 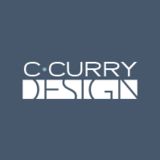