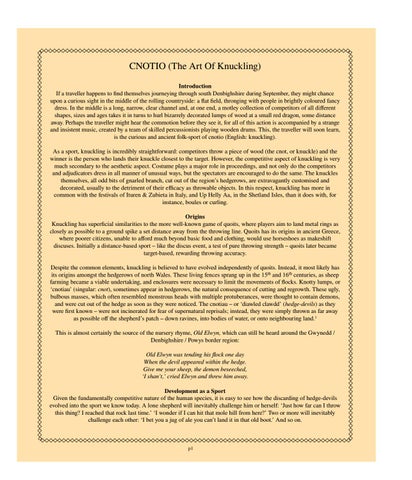 CNOTIO (The Art Of Knuckling) Introduction If a traveller happens to find themselves journeying through south Denbighshire during September, they might chance upon a curious sight in the middle of the rolling countryside: a flat field, thronging with people in brightly coloured fancy dress. In the middle is a long, narrow, clear channel and, at one end, a motley collection of competitors of all different shapes, sizes and ages takes it in turns to hurl bizarrely decorated lumps of wood at a small red dragon, some distance away. Perhaps the traveller might hear the commotion before they see it, for all of this action is accompanied by a strange and insistent music, created by a team of skilled percussionists playing wooden drums. This, the traveller will soon learn, is the curious and ancient folk-sport of cnotio (English: knuckling). As a sport, knuckling is incredibly straightforward: competitors throw a piece of wood (the cnot, or knuckle) and the winner is the person who lands their knuckle closest to the target. However, the competitive aspect of knuckling is very much secondary to the aesthetic aspect. Costume plays a major role in proceedings, and not only do the competitors and adjudicators dress in all manner of unusual ways, but the spectators are encouraged to do the same. The knuckles themselves, all odd bits of gnarled branch, cut out of the region’s hedgerows, are extravagantly customised and decorated, usually to the detriment of their efficacy as throwable objects. In this respect, knuckling has more in common with the festivals of Ituren & Zubieta in Italy, and Up Helly Aa, in the Shetland Isles, than it does with, for instance, boules or curling. Origins Knuckling has superficial similarities to the more well-known game of quoits, where players aim to land metal rings as closely as possible to a ground spike a set distance away from the throwing line. Quoits has its origins in ancient Greece, where poorer citizens, unable to afford much beyond basic food and clothing, would use horseshoes as makeshift discuses. Initially a distance-based sport – like the discus event, a test of pure throwing strength – quoits later became target-based, rewarding throwing accuracy. Despite the common elements, knuckling is believed to have evolved independently of quoits. Instead, it most likely has its origins amongst the hedgerows of north Wales. These living fences sprang up in the 15th and 16th centuries, as sheep farming became a viable undertaking, and enclosures were necessary to limit the movements of flocks. Knotty lumps, or ‘cnotiau’ (singular: cnot), sometimes appear in hedgerows, the natural consequence of cutting and regrowth. These ugly, bulbous masses, which often resembled monstrous heads with multiple protuberances, were thought to contain demons, and were cut out of the hedge as soon as they were noticed. The cnotiau – or ‘diawled clawdd’ (hedge-devils) as they were first known – were not incinerated for fear of supernatural reprisals; instead, they were simply thrown as far away as possible off the shepherd’s patch – down ravines, into bodies of water, or onto neighbouring land.1 This is almost certainly the source of the nursery rhyme, Old Elwyn, which can still be heard around the Gwynedd / Denbighshire / Powys border region: Old Elwyn was tending his flock one day When the devil appeared within the hedge. Give me your sheep, the demon beseeched, ‘I shan’t,’ cried Elwyn and threw him away. Development as a Sport Given the fundamentally competitive nature of the human species, it is easy to see how the discarding of hedge-devils evolved into the sport we know today. A lone shepherd will inevitably challenge him or herself: ‘Just how far can I throw this thing? I reached that rock last time.’ ‘I wonder if I can hit that mole hill from here?’ Two or more will inevitably challenge each other: ‘I bet you a jug of ale you can’t land it in that old boot.’ And so on. 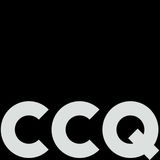