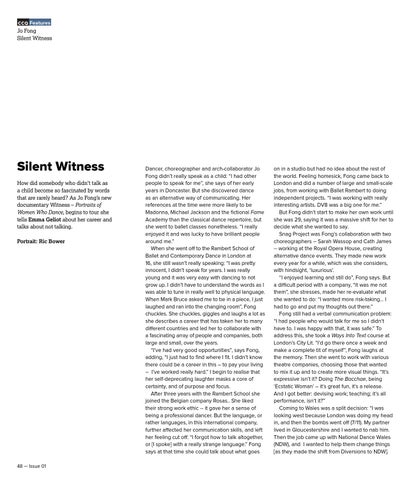 Silent Witness How did somebody who didn’t talk as a child become so fascinated by words that are rarely heard? As Jo Fong’s new documentary Witness – Portraits of Women Who Dance, begins to tour she tells Emma Geliot about her career and talks about not talking. Portrait: Ric Bower

Dancer, choreographer and arch-collaborator Jo Fong didn’t really speak as a child: “I had other people to speak for me”, she says of her early years in Doncaster. But she discovered dance as an alternative way of communicating. Her references at the time were more likely to be Madonna, Michael Jackson and the fictional Fame Academy than the classical dance repertoire, but she went to ballet classes nonetheless. “I really enjoyed it and was lucky to have brilliant people around me.” When she went off to the Rambert School of Ballet and Contemporary Dance in London at 16, she still wasn’t really speaking: “I was pretty innocent, I didn’t speak for years. I was really young and it was very easy with dancing to not grow up. I didn’t have to understand the words as I was able to tune in really well to physical language. When Mark Bruce asked me to be in a piece, I just laughed and ran into the changing room”, Fong chuckles. She chuckles, giggles and laughs a lot as she describes a career that has taken her to many different countries and led her to collaborate with a fascinating array of people and companies, both large and small, over the years. “I’ve had very good opportunities”, says Fong, adding, “I just had to find where I fit. I didn’t know there could be a career in this – to pay your living – I’ve worked really hard.” I begin to realise that her self-deprecating laughter masks a core of certainty, and of purpose and focus. After three years with the Rambert School she joined the Belgian company Rosas.. She liked their strong work ethic -- it gave her a sense of being a professional dancer. But the language, or rather languages, in this international company, further affected her communication skills, and left her feeling cut off: “I forgot how to talk altogether, or [I spoke] with a really strange language.” Fong says at that time she could talk about what goes

on in a studio but had no idea about the rest of the world. Feeling homesick, Fong came back to London and did a number of large and small-scale jobs, from working with Ballet Rambert to doing independent projects. “I was working with really interesting artists. DV8 was a big one for me.” But Fong didn’t start to make her own work until she was 29, saying it was a massive shift for her to decide what she wanted to say. Snag Project was Fong’s collaboration with two choreographers – Sarah Wassop and Cath James -- working at the Royal Opera House, creating alternative dance events. They made new work every year for a while, which was she considers, with hindsight, ‘luxurious’. “I enjoyed learning and still do”, Fong says. But a difficult period with a company, “it was me not them”, she stresses, made her re-evaluate what she wanted to do: “I wanted more risk-taking... I had to go and put my thoughts out there.” Fong still had a verbal communication problem: “I had people who would talk for me so I didn’t have to. I was happy with that, it was safe.” To address this, she took a Ways Into Text course at London’s City Lit. “I’d go there once a week and make a complete tit of myself”, Fong laughs at the memory. Then she went to work with various theatre companies, choosing those that wanted to mix it up and to create more visual things. “It’s expressive isn’t it? Doing The Bacchae, being ‘Ecstatic Woman’ – it’s great fun, it’s a release. And I got better: devising work; teaching; it’s all performance, isn’t it?” Coming to Wales was a split decision: “I was looking west because London was doing my head in, and then the bombs went off (7/11). My partner lived in Gloucestershire and I wanted to nab him. Then the job came up with National Dance Wales (NDW), and I wanted to help them change things [as they made the shift from Diversions to NDW].