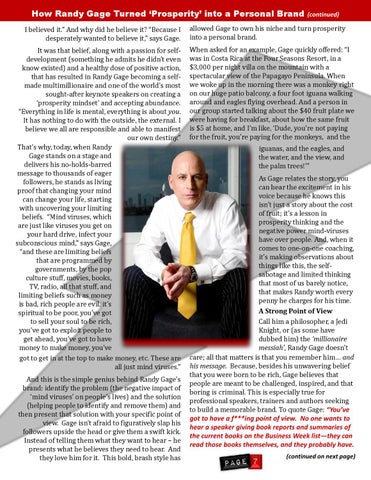 How Randy Gage Turned ‘Prosperity’ into a Personal Brand I believed it.” And why did he believe it? “Because I desperately wanted to believe it,” says Gage. It was that belief, along with a passion for selfdevelopment (something he admits he didn’t even know existed) and a healthy dose of positive action, that has resulted in Randy Gage becoming a selfmade multimillionaire and one of the world’s most sought-after keynote speakers on creating a ‘prosperity mindset’ and accepting abundance. “Everything in life is mental, everything is about you. It has nothing to do with the outside, the external. I believe we all are responsible and able to manifest our own destiny.” That’s why, today, when Randy Gage stands on a stage and delivers his no-holds-barred message to thousands of eager followers, he stands as living proof that changing your mind can change your life, starting with uncovering your limiting beliefs. “Mind viruses, which are just like viruses you get on your hard drive, infect your subconscious mind,” says Gage, “and these are limiting beliefs that are programmed by governments, by the pop culture stuff, movies, books, TV, radio, all that stuff, and limiting beliefs such as money is bad, rich people are evil, it’s spiritual to be poor, you’ve got to sell your soul to be rich, you’ve got to exploit people to get ahead, you’ve got to have money to make money, you’ve got to get in at the top to make money, etc. These are all just mind viruses.” And this is the simple genius behind Randy Gage’s brand: identify the problem (the negative impact of ‘mind viruses’ on people’s lives) and the solution (helping people to identify and remove them) and then present that solution with your specific point of view. Gage isn’t afraid to figuratively slap his followers upside the head or give them a swift kick. Instead of telling them what they want to hear – he presents what he believes they need to hear. And they love him for it. This bold, brash style has

allowed Gage to own his niche and turn prosperity into a personal brand.

When asked for an example, Gage quickly offered: “I was in Costa Rica at the Four Seasons Resort, in a $3,000 per night villa on the mountain with a spectacular view of the Papagayo Peninsula. When we woke up in the morning there was a monkey right on our huge patio balcony, a four foot iguana walking around and eagles flying overhead. And a person in our group started talking about the $40 fruit plate we were having for breakfast, about how the same fruit is $5 at home, and I’m like, ‘Dude, you’re not paying for the fruit, you’re paying for the monkeys, and the iguanas, and the eagles, and the water, and the view, and the palm trees!’” As Gage relates the story, you can hear the excitement in his voice because he knows this isn’t just a story about the cost of fruit; it’s a lesson in prosperity thinking and the negative power mind-viruses have over people. And, when it comes to one-on-one coaching, it’s making observations about things like this, the selfsabotage and limited thinking that most of us barely notice, that makes Randy worth every penny he charges for his time. A Strong Point of View Call him a philosopher, a Jedi Knight, or (as some have dubbed him) the ‘millionaire messiah’, Randy Gage doesn’t care; all that matters is that you remember him… and his message. Because, besides his unwavering belief that you were born to be rich, Gage believes that people are meant to be challenged, inspired, and that boring is criminal. This is especially true for professional speakers, trainers and authors seeking to build a memorable brand. To quote Gage: “You’ve got to have a f***ing point of view. No one wants to hear a speaker giving book reports and summaries of the current books on the Business Week list—they can read those books themselves, and they probably have. (continued on next page)

For Even More Great Content & Brand-Building Resources, Visit Us at: MillionDollarBrand.com 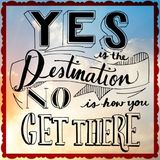 The online magazine for speakers, authors, coaches, and infopreneurs to build their Million Dollar Brand. Grow Your Business. Own Your Niche...

The online magazine for speakers, authors, coaches, and infopreneurs to build their Million Dollar Brand. Grow Your Business. Own Your Niche...