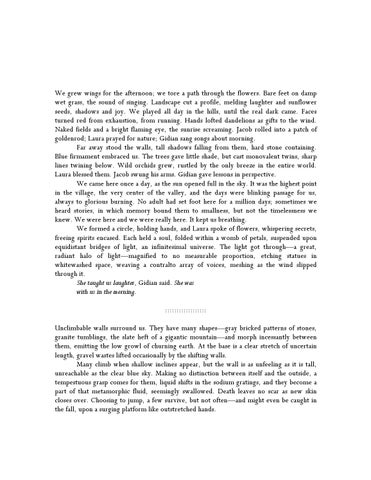 We grew wings for the afternoon; we tore a path through the flowers. Bare feet on damp wet grass, the sound of singing. Landscape cut a profile, melding laughter and sunflower seeds, shadows and joy. We played all day in the hills, until the real dark came. Faces turned red from exhaustion, from running. Hands lofted dandelions as gifts to the wind. Naked fields and a bright flaming eye, the sunrise screaming. Jacob rolled into a patch of goldenrod; Laura prayed for nature; Gidian sang songs about morning. Far away stood the walls, tall shadows falling from them, hard stone containing. Blue firmament embraced us. The trees gave little shade, but cast monovalent twins, sharp lines twining below. Wild orchids grew, rustled by the only breeze in the entire world. Laura blessed them. Jacob swung his arms. Gidian gave lessons in perspective. We came here once a day, as the sun opened full in the sky. It was the highest point in the village, the very center of the valley, and the days were blinking passage for us, always to glorious burning. No adult had set foot here for a million days; sometimes we heard stories, in which memory bound them to smallness, but not the timelessness we knew. We were here and we were really here. It kept us breathing. We formed a circle, holding hands, and Laura spoke of flowers, whispering secrets, freeing spirits encased. Each held a soul, folded within a womb of petals, suspended upon equidistant bridges of light, an infinitesimal universe. The light got through—a great, radiant halo of light—magnified to no measurable proportion, etching statues in whitewashed space, weaving a contralto array of voices, meshing as the wind slipped through it. She taught us laughter, Gidian said. She was with us in the morning. :::::::::::::::::: Unclimbable walls surround us. They have many shapes—gray bricked patterns of stones, granite tumblings, the slate heft of a gigantic mountain—and morph incessantly between them, emitting the low growl of churning earth. At the base is a clear stretch of uncertain length, gravel wastes lifted occasionally by the shifting walls. Many climb when shallow inclines appear, but the wall is as unfeeling as it is tall, unreachable as the clear blue sky. Making no distinction between itself and the outside, a tempestuous grasp comes for them, liquid shifts in the sodium gratings, and they become a part of that metamorphic fluid, seemingly swallowed. Death leaves no scar as new skin closes over. Choosing to jump, a few survive, but not often—and might even be caught in the fall, upon a surging platform like outstretched hands.

Sunshine in the Valley (excerpt)

Sunshine in the Valley (excerpt)